As many of you know, I’m something of a gamer. My (sometimes many-years old now) articles on minor gaming hacks remain popular today, and I still respond to comments and questions from other hackers following along. After years of waiting, the English port of La-Mulana was finally released on WiiWare. I rushed out to purchase it, and realized that I hadn’t turned on my Wii in a long, LONG time. Upon testing, it turns out my Wii’s DVD drive finally died (after 5+ years of duty), and I was beginning to notice how much time it took to cart the Wii around to various rooms of the house. Besides all that it just seemed a waste to leave the Wii motherboard in that ugly white shell, strapped to a broken DVD drive for the remainder of its life.

So I decided to make a hack of it. I transferred all of my Wii Disc games onto a WBFS formatted hard drive, soft-modded my Wii using the SD card slot, and began construction on my ‘Wii in a treasure box’. Read on for all the details and a ton of photos. 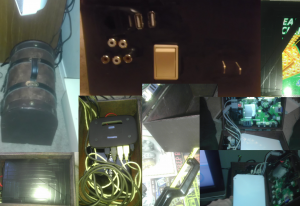 The first thing I needed to do was to remove all the parts of the Wii that were not necessary or no longer useful. The front plate and buttons had no more use (power-on via infra-red is much easier), neither did the DVD drive and loading mechanism. The outer case was no longer needed, and the Gamecube cover and ports, while still working, were not a necessity.

I found an old treasure box that had been sitting in a closet for a while, and decided it would make a fine new case for the Wii. Upon examining the case, it occurred to me that I would be able to fit much more than the Wii itself into the case. I started by finding a cookie-tin that was the appropriate size to shield the Wii from the heat of my external hard drive. Once I was sure it would fully separate the two heat elements (the hard drive and the Wii CPU), I covered it in electrical tape. This was both for aesthetics and to prevent any shorting of the motherboard against any metal leads.

Rather that using just screws to drill into the case or the tin, I used a combination of direct screws and folded electrical-tape ran and screwed in above the cookie-tin lid to ensure the Wii’s motherboard would remain in place. I had originally intended for this build to be fanless, but it turns out the tiny exhaust fan that came with the Wii is a real heat dissipation machine, and the Wii would overheat without it running.

I finished mounting the Wii to the tin and offset the angle of the motherboard such that any infrared signals aimed at the Wii (power-on) would diffuse through the crack between the treasure box lid and the bottom of the box. This prevented me from having to run an IR repeater or fiber optic line to the infrared receiver on the Wii. It also means the SD card slot is in a position to easily be inserted or removed.

Although the Wii still had WiFi capability (and I had mounted the WiFi antennas in the top portion of the treasure box), I wanted the option of ethernet as well. Luckily, any old cisco usb to ethernet adapter works just fine on the Wii. I found one in my computer junk drawer, and proceded to run an ethernet cable out from the adapter (plugged into the usb hub) to the backplate.

After all is said and done, the rear backplate contains connectors for:

An extension cable is used to power the treasure box when in use, and when not in use no external cables are required. After binding them in electrical tape, I cut out sections of the rear section of the treasure box matching the backplate ports. I’m still not sure if this will be the last iteration, so I left the backplate as is for now (mostly tape and wood). Perhaps I’ll come back when I get a 3d printer, and print out a backplate proper. I’m also not settled on whether to cut a full exhaust port, or just allow the hot air to be pushed out the crack in the lid. For my next article, I’ll likely add a front temperature LCD and do some experimentation around this functionality.

Till next time, hack (and game) on folks!