As anyone living in Seattle can tell you, the rainy season has finally returned. This is great news for basement-dwellers like myself, who languish through the summer months waiting for the cold rains. And while I’m always striving to reinvent myself, there are some facets of life that are as inevitable as the rains in Seattle. One of those certainties of life is that I’m going to want to play some obscure game. Years ago this may have been a difficulty, technically. Sadly today it is a difficulty, ethically. You can download any and all obscure games for any system in a matter of seconds on most home connections. While that may be fine and well for those who condone piracy, that is cold comfort to me, surrounded by ethical quandary. Technically speaking, it is a simple matter to find these rare titles to pirate or to purchase. However the purchase price for many an obscure title is often way beyond reasonable. Where then, do you draw the line in the sand and say ‘I’m going to pirate that game, or I’m never going to play that game.”?

I regularly get my game on with other folks who like to make games (who are often terrible at playing games, but that’s another thing entirely). The thought of pulling out a burnt disk and popping that into my console (which are always modded, naturally), and the ensuing ‘fair use’ and ‘wear and tear’ and ‘let me show you my game shelf with the physical disk on it’ conversation that tends to ensue can fill one with dread. As a collector (and public persona) I feel I should only ever burn a game if I have the physical disk which I purchased. The money may not have gone to the publisher (as many of these publishers are many years out of business), but at least I put money back into a system which supports an activity I love. Not everyone is so lucky as to have the extra income to afford such things. In some ways it mirrors the harsh economic realities that are facing the US as a whole right now. Could we not propose a fair-use solution based on economic common sense? It couldn’t be that difficult to find a fair solution. Something like “Any digital artifact of such rarity that the mean selling price is above 1/100th the average household income shall be playable from the digital archive until such time the mean price differs”. /end rant

Regardless, it is often the case that I’m telling someone that we should play this ‘awesome, yet slightly obscure’ game for a ‘more than slightly outdated and perhaps obscure system’. How then to bring that experience to them, without resorting to piracy, and knowing it’s going to be rainy here in Seattle?

The answer is, as always, to put things together in a new way. Read on for more photos and a bit more info on how I stuffed a portable Saturn rig in a big blue plastic toy chest. 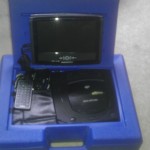 I started, as I often do, at the local thrift shop. I found a terrific blue plastic Kinex toolbox/toychest full of Kinex (which I’ll put to good use in other hacks) for a fiver. I also managed to pick up an 8″ DVD player for 20$. You can find these online for this price range at the usual deals sites, and often have video-in. 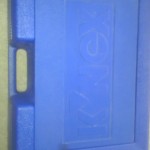 I started by removing the battery from the DVD player to bring the weight down. I then used an epoxy to glue the DVD player unit to the hinged lid of the case. 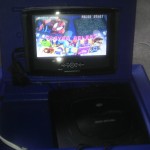 From there it was a simple matter to tape down the video and power cables to the inner walls of the case, leaving plenty of room for a couple of controllers, a nice 20ft power extension cable, and a dvd-case with some favorites. All in all it took about ten minutes of actual work (not including glue-setting time), and it works rather well. No rain gets in and it’s a tough box that’ll withstand the occasional bus or train ride. 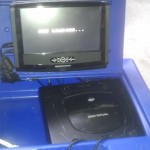