It’s not often I post up about something about my professional career. I think that most of my readers get their business/professional/industry news from other outlets, and there’s not generally much for me to say on a topic that’s been covered my the mainstream media. Knowing this, I tend to post up those things which appeal to my readers: personal projects, hacks, games, cool software tricks, hardware builds, etc. There are some times, however, where I do think it’s OK to put on my work hat for a while and post up something about how things are going for me in the professional software industry. 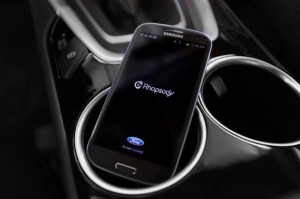 Today, things are going rather well. Rhapsody + Ford Sync was launched today to much fanfare at the International Consumer Electronics Show (CES). After many months my NDA is lifted and I can finally publicly talk about one of my secret projects! Everyone who has Rhapsody on their Android device can get into a Sync enabled Ford car and use this functionality today, functionality which I implemented myself last fall! If you saw the live announcement today they actually praise Rhapsody’s Android + Ford Sync development team. That’s not to say this work was done in a vacuum, oh no! I’m backed up by a tremendous team of folks from business, QA, design, product development, and marketing (not to mention a terrific iOS developer) who make my job all too easy sometimes. It certainly puts a smile on my face to see another successful product launch.