First generation Android-on-a-stick PCs can be had for as low as 30$ now, and I routinely find old webcams available for 5$ everywhere. Now that Google+ users get free unlimited storage for their photos (up to a certain resolution), the time has never been better to build a home security system. Why? Because Google has thoughtfully enabled ‘instant upload’ for Google+. Using a few simple (and free) Android apps you can turn your old stick PC (or old Android phone) into a home security system with unlimited cloud storage. 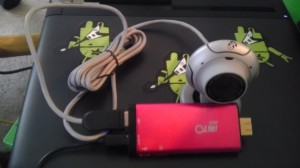 While IP camera apps which turn your phone into network streaming video servers are quite useful in their own right, they don’t answer the question of ‘where does that data go?’. With an app which supports time-lapse photography, we know the answer to that question, as Google+ can automatically upload every photo taken thanks to ‘Instant Upload’.

If you’re using a android-on-a-stick and not an old phone then you’ll need to make sure your time-lapse app supports your USB webcam. Here’s a good thread on which cameras are confirmed working. Many free photo apps (example) (and perhaps even the photo app that came with your stick pc) support time-lapse photography.

Google recently changed their privacy policy to allow for one user to hold multiple accounts. I’d recommend setting one up for your security system, so as not to cloud your regular Google+ instant uploads folder with an infinite history of security photos.

Most of these stick PCs come with 8gb of internal storage, though some come with 4gb. You can also generally use micro-SD cards as well. I picked up a 32gb micro-sd card for 20$ at my local big-box store. As the photos we’ll be shooting will be relatively small, you will only have to clear out your storage every
(megabytes free storage)/((photo file size in megabytes) * (Photos Per Month))
months. So for my setup, I have 28gb of free space, the photo size is 60 kilobytes (.6 megabyte), and I have a photo taken every 30 seconds. One photo every 30 seconds is about 86 thousand images per month. So I plug that into the above equation and I get (28000)/((.06) * 86000) which works out to be every 5.4 months. So roughly twice a year I’ll need to either format the SD card or wipe the images from it (or you can store it securely as a security backup somewhere). If I dropped that down to one every ten minutes I would only have to change SD cards every 5 years.

And that’s that. You can leave your stick PC plugged in, sipping away at an old phone charger, pulling at max 2 amps of power. That’s less than 3$ per year in electricity costs, and zero for storage.

If anyone has had trouble uploading that many images to Google+ I’d be curious to hear about it. I probably have 20,000 images uploaded personally with no issues so far.