During the first week in May, I considered myself quite thrifty. I bought a used magnifying glass from a thrift store, along with an ancient pair of studio headphones I plan to refurbish. Neither are produced by companies that still exist. Having not made a corporate purchase since the 1st, I was feeling fairly economical. On May 6th, that all changed. 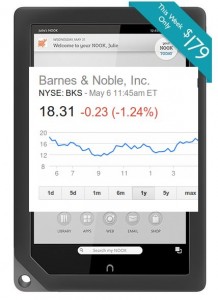 You see, on May 8th I fly down for a long weekend in Virginia Beach. Having just sold off the remaining tablets I had in my possession last month (in preparation for the Google I/O yearly tablet price drop), I was in the market for a media consumption device to use on the plane.

My first consideration was the Google Nexus 10. This seemed like a bad idea for 2 reasons:

I did find myself enamored by its 1080+ screen. A high resolution screen like that could be used to great effect in document (and code) editing, and my primary complaint with my last batch of tablets (both Android and Win8 RT/Pro) was their (now antiquated feeling) 1280×800 resolution screens.

Fate intervened in the form of a failing business (Barnes and Nobles (B&N)) trying to sell off stock and gain market share. On May 5th, B&N dropped the price of their 1080+ resolution tablet down to 180$. You also can get 2x 25$ gift cards by going through their ‘refer a friend’ program. That drops the effective price of the tablet down to 130$. Quite a deal, especially when you factor in B&N’s current stock price of $18.

Why then, is this write-up titled ‘throwing common sense out the window’? It’s obvious to anyone in our industry that B&N is struggling, badly, and is likely to fold.

“Common sense” would clearly dictate that you shouldn’t buy stock in a company you think will fold soon.

Does common sense have a place in the high-frequency cesspool that is modern investing? Only time (and data metrics) will tell.

Overall stock + cash purchase for a 1080+ Android tablet (which recently got the Google Play store): 148$. Not bad.