If you’ve been following the site for the past 10 years, you’ll know that my update frequency rises and falls from year to year and season to season. Likewise, if you’re following my GitHub profile, you may have been wondering, “What’s Hunter Davis been up to these past few months?”.

“What’s Hunter Davis been up to these past few months?”.

While certainly I make thousands of commits professionally to private Github repositories and professional organizations, the truth is in my personal life I have many interests and a healthy family life, and my interests ebb and flow with the seasons. So while at work I may spend the majority of my time coding up awesome android and embedded apps, I may not get to talk about them for many months after I’ve finished development. What then, has been filling up my free time (besides family) this season? I’ve been catching up on some of the games on my “gaming bucket list”. I realized that it’s been over a dozen years since my last game review, so it seemed the right time for an update.

I’ve been catching up on some of the games on my “gaming bucket list”.

Tomb Raider: Now that it’s under 20$, there’s no reason not to buy this game. It’s very similar to Uncharted, but with an RPG leveling system bolted on top. The weapons level up as well. It’s an experience game, as in ‘you should experience this game’. The production quality is top notch and the sheer amount of effort that must have gone into making it is evident throughout. The story-line was pretty gripping, and many times I was brought back to those days of my youth spent playing tomb raider on PS1.

Bioshock Infinite: Sad as it is to say, I picked up this game and spent about 2 hours playing before I moved on to other games and kind of forgot about it. The scenery is gorgeous, but the initial pacing is pretty slow, even for a Bioshock game. The story is interesting but not particularly in-depth. I’ve already seen about 10 racist things happen in the game, so it’s definitely not one you should play anywhere near young children. For that reason alone it’ll probably take me a while to beat this one. Bottom line: It is good enough to keep me coming back to finish it, but not good enough to keep me from playing more interesting games as they come along. Definitely pick it up if it drops to the 15-20$ range.

Injustice: Gods Among Us

Injustice: Gods Among Us: I could not stop playing this game. The most enjoyable fighting game I’ve played in years. If you were a fan of the Justice League or Teen Titans animate series you will love this game. All the old voice cast is there (both Justice League and Teen Titans). I became completely engrossed in the single player story mode, and spent about 8 hours straight playing through it. It’s very much like playing through an extended DC animated movie. I simply could not stop playing (and I was playing on hard mode, which is quite challenging). If you’ve got folks to play multi-player with (or a low-latency connection to play online) I’d recommend picking this up, otherwise rent it. If it drops below 20$, pick it up. I could definitely see myself replaying through this one a few times.

Metroid Fusion: OK, people criticize this game because it’s ‘too linear’. You know what else is linear? A movie. This game felt (to me) like Metroid Prime 3. Sure, it’s linear, but it’s also paced. The backtracking is minimal. The storyline and interaction with your AI commanding officer keeps the dialog feeling fresh and interesting, even to veterans of the Metroid series. I picked this up for 15$ at my local classic games store. It’s a great way to break in your Retrode GBA adapter, and the controls feel great with a SNES controller.

Darksiders 2: You can often find this game for 5-10$. Pick it up while you still can. They won’t be making more. It’s like the God of War series, but with more enemies on screen ala the Dynasty Warriors series. The plot is (to me), much more enjoyable as well, featuring a mix of christian and pagan mythology, rather than another re-hashed Greek myth like the GOW series. It’s pretty dark, and definitely not something you can play around kids. Still, for the price that it’s at now it’s a definite buy.

God of War: Ascension. Gross, yawn, woah, gross, yawn, done. That’s my experience playing the first 4 hours of GOW:Ascension. While there’s nothing wrong with a little gross-out, and it’s certainly not out of character for the GOW series, that’s the problem. Nothing in this game is out of character for the GOW series. You start off with so many powers and weapons you already feel like you’ve been leveling up through a game’s worth of GOW, and it all feels done before. Worse still, it’s a prequel for a game that we all played almost 10 years ago, then re-played again 2 years ago. So story-line wise it doesn’t answer any questions or raise any new ideas. For the cost, it just doesn’t seem worth it. Maybe pick it up if it ever hits bargain basement status (which it surely will if review scores are any indication). For now, rent it if you are curious.

Luigi’s Mansion: I played through the Gamecube version again in preparation for this game. There are some marked differences, but in many ways they are improvements. The ghosts are no longer styled like real people, but rather in a cartoon-like style. I imagine it was done to decrease the overall creepiness level of the Gamecube version, which at times could be a dark, potentially child-terrifying, game. This feels like something you could play with your 8 year old. The controls have been simplified slightly, and it’s all the better for it. I played through on my 3DS XL and it looked great. I can’t speak for those on the smaller 3DS, but the visuals appeared crisp and detailed. The addition of extra mansions helped prevent the feeling of backtracking that plagued the previous game. If you’re a fan of the original, pick this up now. I purchased this during the ‘get Super Mario 3D Land free!’ promotion, and am certainly happy with the deal. Casual fans will probably enjoy it as well, but you can probably find it for 30$ if you wait a couple months.

Sly Cooper: Fans of the original should pick this up right away. Those with children who like to watch them play or help play along in less difficult parts should pick this up right away. Those who have never played, imagine a cross between Mario and Assassin’s Creed. You’re a sneaky raccoon thief with a fun assortment of animal pals helping you steal back artifacts in gorgeous cartoon levels. I’ve seen this at 30$ for the PS3 and it’s well worth it. I recently picked it up for 20$ on the Vita and I’m very impressed with how well the visuals stand up to the PS3 version. Very fun, very well produced, and very well worth the bargain price.

Want to know why this game is selling horribly? It’s not for lack of characters (though that’s what you certainly seem to think it is), it’s for lack of innovation. Everything about this game screams ‘RIP OFF’. You even aped smash brothers’ shitty camera. Really? Ugh. Even getting a free vita version when you buy the PS3 version isn’t enough to make this a ‘buy’. Two shitty games for one full price is still paying half price for the same shitty game, two times. The worst part is, I don’t think it’d take much to fix this game. Give us some new gameplay modes (have you even played Battlestation DON?) and a lot more interaction with the background elements. Throw in some more varied match types, and tack on some RPG elements to keep us invested. I couldn’t even make it through a single play-through in single player mode and I was stuck on a plane. It just all feels like it’s been done before, about 10 years ago, about 10 times better.

Grand Theft Auto: Vice City (10th anniversary Android Edition): It’s not San Andreas, but it’ll do for now. It looks and plays gorgeously on my Nook HD+ tablet, and the radio stations take me back to another time. A great buy for a 5$ and certainly worth it for those long plane rides. I spent a 6 hour flight from DC to Seattle just cruising around Vice City in a series of motorcycles, doing stunts and missions, feeling like it was old times.

Brutal Legend: I pre-ordered this on Steam at full price, having already purchased it for the 360 what seems like an eternity ago (4 years). I never played it, but always meant to (and was way into Psychonauts, purchasing it every time it came out on a new platform). Prediction: psychonauts will come out for android within a year. At any rate, I enjoyed playing through Brutal Legend quite a bit. The soundtrack is AWESOME. It’s full of metal greats and really adds to the experience. Crank up the volume when playing this one. Seeing as how it’s now available for 10$ or so, it’s a definite purchase. I spent about 25 or so hours before completing it, and certainly felt like I could have spent about twice that going through all the optional missions. A must own for metal-heads and Tim Schafer fans alike.

Prediction: psychonauts will come out for android within a year. 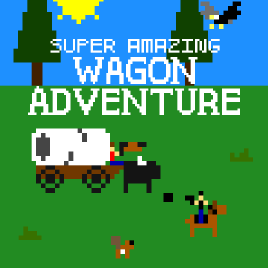 Super Amazing Wagon Adventure: ARRGGGGHHH WHY CAN’T I BEAT THIS GAME?? I’ve literally played through over 100 times and I have never made it to the ‘real’ ending. I’ve go so many different wagons and have had so many time traveling, space-faring, scuba diving adventures but I’ve never made it. 1$. 1 freaking dollar I spent on this seemingly cute little game. It’s a trap. Run. You’ll never escape it.