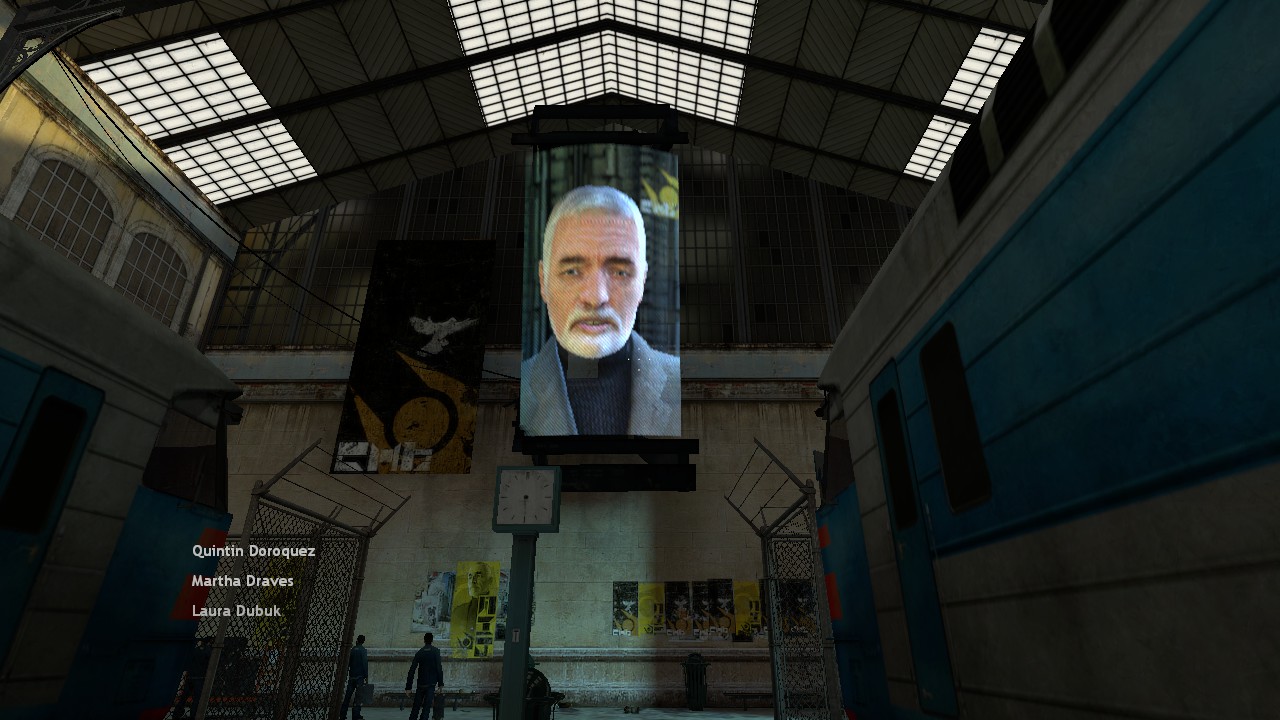 So here it is, the big boy. There’s no way I can avoid reviewing it first, as it’s the reason I got on Steam in the first place. Like most everyone else, the first time I decided I absolutely had to get on steam was when I read you could install Half-Life 2 directly from it. I had built a very powerful (perhaps a Geforce 3?) gaming pc to play Half-Life 2. I was ready from the moment I had finished Half-Life 2 (3am Jan 2nd 1999, and a story unto itself). While my gaming dollar (and the prerequisite graphical upgrade) could not be swayed by Doom 3, Half-Life 2 made a demand of my wallet which I just couldn’t resist. 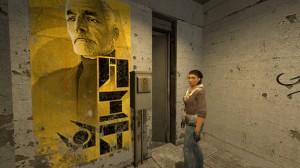 I fire up Steam and I install Half-Life 2 in about an hour. (I remember it took at least 3 hours back on 04, so at least my download speed has improved marginally) So vividly did I remember the that came along with this screen that I didn’t realize my speakers were turned off. How many times had I seen this screen in the past ten years? Hundreds, if not thousands of times. It takes me back. Back when my gaming rig was the center of my universe. I had a huge tri-corner desk set up which took up the better part of our spare bedroom. In the center was a (must have been 50lbs) 19″ CRT. The lights were dimmed and smoke was gently flowing in the air (some things never change.) I was ready for an adventure, ready to experience a story, as I am now. The real story I’m beginning to see? It’s that a trip through my Steam games list is a trip through my 20s.

You see, In 2004 I was 23, and as such I had just started working at my first post-collegiate job. I finally had enough money scraped together to spend on a decent gaming rig and I was going to be sure to flex that money wisely. I made a full 1/3 of my current salary. That was just shy of 10 years ago. Gaming provided a much needed avenue of escape to one poor gamer in the middle of nowhere. Half-Life 2 was, at the time, the pinnacle of that escapism. Beautiful, exciting, fully absorbing. How would I find it now, a family man in my 30s? 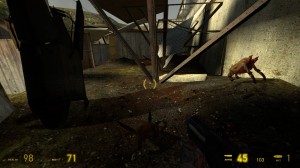 Though they have aged, the graphics in HL2 have aged well. The textures, even when pushed up to maximum, don’t exactly hold up to current generation showstoppers like ‘The Last of Us’. They hold up, but not brilliantly. The game-play however, is brilliant. Every scene is deliberately paced. The game doesn’t force you down a path as much as it hides the fact that the path you chose was the only way to go. Right from the ge-go every scene paints a picture of the world you’ve woken up into. The only breaks in the narrative are those brought by loading screens. Even the pause/menu screen has characters and dialog. I should mention that though they are short lived, loading screens do pop up somewhat frequently, and they do distract from the narrative. 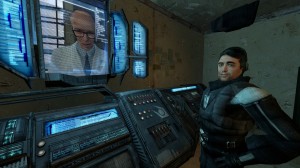 What a narrative it is though! Secrets, world domination, hidden dimensional spies. It’s everything from HL1 and an extra dose of post apocalyptic fun. You awake into a brutal world and must immediately play along, hide, immerse yourself into an unfamiliar world full of aliens. From a game-play perspective things start out slow. Use some boxes to build a ladder to that window (and show off the new physics engine). Run quick before they catch you! Catch your breath, and sneak. The pacing is deliberate, and masterful. 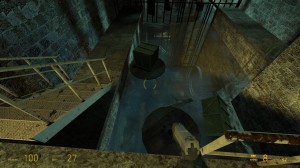 The game introduces you to Alex pretty quickly, which is great because she’s the prototype “Kick-Ass but Emotionally Relatable NPC”. From an AI perspective she doesn’t get in your way and doesn’t bog down the story or gun-play. She’s also a very likable character, her changing emotional state providing an additional layer of immersion into the story. The player character (Gordon Freeman, you) never speaks, and is never heard on camera. I highly recommend playing through with developer’s commentary turned on, as the rational behind the ever-silent protagonist (player immersion) has been both lauded and hotly debated in the decade since HL2 released. 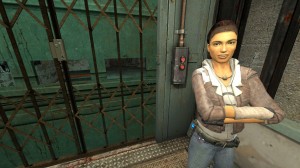 It’s not enough though, to have an interesting story and likable characters. A blockbuster AAA title needs to feature a hero’s journey, and an epic struggle. HL2 delivers in scores. One of the most memorable scenes occurs maybe 1/3 of the way into the game. You’ve done some light shooting, and you’ve slowly been building up your arsenal and hiding/killing your way though some alien soldiers. Lots of story, everything slowly building up to… something. As a gamer you can feel it.

Valve set the bar for what makes a “modern” shooter, and it hasn’t been raised much higher in the decade since. 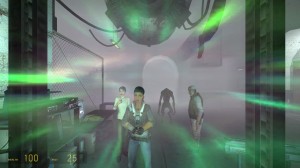 After all that deliberate pacing, all those minor soldiers you had to flank and run around, you’re ready for something. So what does Valve do? They throw you into a boat level and let you run from, then destroy some helicopters. This blew me away when it was released. I clearly wasn’t the only one as it feels like it could have been plucked from any modern shooter. The “switch up the game-play completely for one minor boss level” tactic isn’t new to the fps genre, but Half Life 2 was the first game in my memory where it really worked. It felt like a brief jaunt into a more modern Metal Slug game. 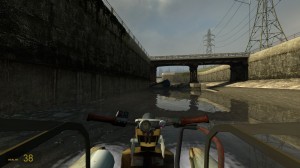 The longer I play HL2, the more I feel that I should stop using the term “modern” to describes games which came after it. Valve set the bar for what makes a “modern” shooter, and it hasn’t been raised much higher in the decade since. I had only originally intended to play for an hour or two (having beat the game many, many times). I ended up playing every night after work for 3 nights before remembering I was going to review 8-bit Commando as well. That’ll be game review #2.

If you’re honestly one of the few people that haven’t played through HL2 and you’re still wondering whether it is worth your time and 5$, go buy it now. You (if you exist) are missing out on one of the quintessential gaming experiences of our generation, and perhaps many generations to come. 92%, wonderful.

Next time: I review 8-bit Commando!