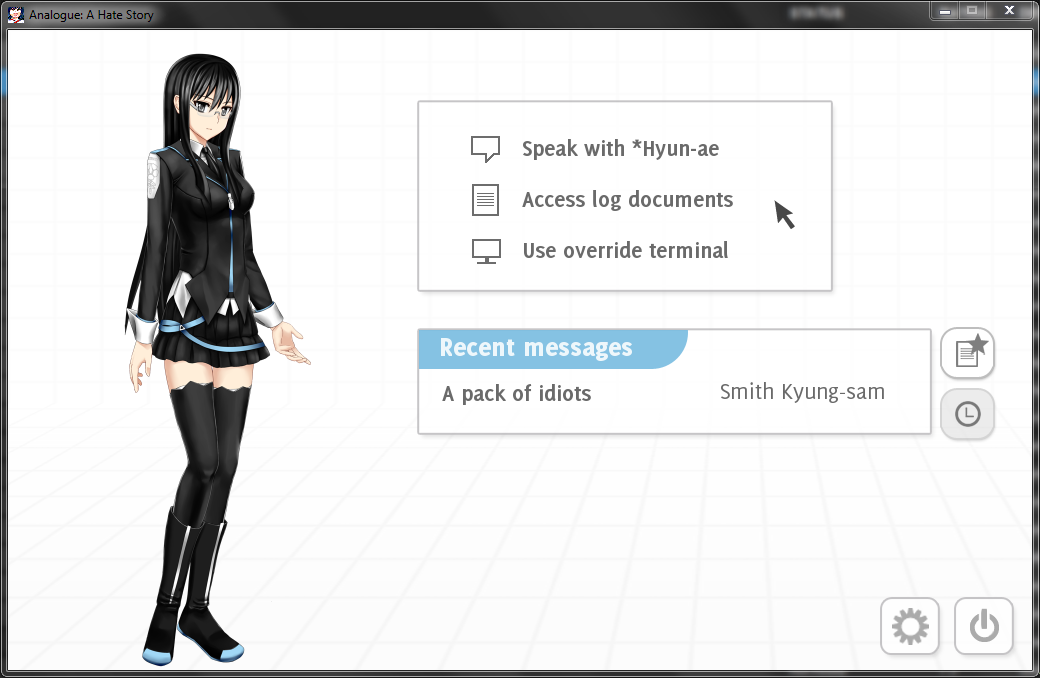 Is the real hate story between myself and visual novel games? 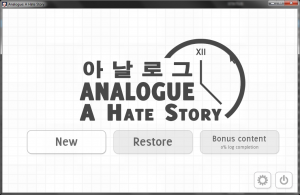 I go into A:AHS knowing nothing. From the title I assume it’s a graphic novel, perhaps a parody. I also assume it came from a humble bundle.

One nice thing about indie games is that they tend to err on the side of ‘lower end pcs’ when it comes to minimum specs. That means for the forseeable future I’ll be reviewing games from my Athlon 64 X2 3800+ pc with an aging Gefore 8200gs at the graphical helm. This isn’t so much more powerful than some of the new tablets coming out nowadays, and certainly no faster than the Haswell generation of integration graphics.

Analogue: A Hate Story (referred to as A:AHS) is apparently a text adventure game, at least from the outset. I was honestly pretty surprised when I saw the initial logon screen. Unphased (I DID used to espout the virtues of DOS to anyone who would listen), I start “hacking” away at the console. How would I define “hacking” in this sense? Blindly typing commands into a terminal, hoping to glean some information.

After typing a few unix-y commands into the console I manage to enable the ‘virtual AI’. This is your typical anime protagonist of the female variety: No-nonsense and quite young looking. 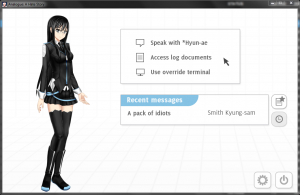 It feels like the game is trying to teach me rudimentalry unix commands. There’s a filesystem with a block format layout which contain logs. At the heart of it these are just plot items. The terminal itself has a superuser concept, and accepts the typical unix ‘su’ superuser command. Unfortunately figuring out the password to use said command is an exercise in tedium. Read through logs and old emails and “interact” with the AI. Maybe I just don’t get visual novel games? Is this the heart of the gameplay? Where is the gripping story? What is the message? That polygamy leads to hurt feelings? It doesn’t exactly make for a compelling experience.

The game is a bit of a mix between visual novel and unix tutorial. The backstory documents feature a detailed family tree and an ancestral Korean polygymist backstory. I could not be less engaged with the story.

On some level, this game may be exploring sexism in Korean society. I can’t tell. They say that it is the youth who have no patience but I think that is only part of the story. In my youth, reading through a mountain of Korean soap-opera drama while interacting with a Unix terminal and anime girls would have sounded pretty awesome. Now it’s absolutely coma-inducing. As someone who writes code (and interacts with terminals all day long), interacting with a limited chat and terminal system during your down time isn’t so appealing. Crawling through personal letters, old emails, and training manuals is starting to become a tired game mechanic.

For those looking to pick up A: AHS, I would ask myself this: “Have you ever read the script to a Soap Opera?”

As a gamer in his 30s playing through this in 2013 I can’t help but feel that this game has contributed to the decline of my eyesight for no good reason. I never felt any sense of payoff, and I definitely didn’t get that far into the game. I’d sooner read a real book (or an EXCELLENT choose your own adventure novel game). 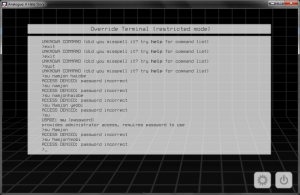 For those looking to pick up A: AHS, I would ask myself this: “Have you ever read the script to a Soap Opera?” Do you think you’d be interested to read one with a slight science fiction theme, one chunk at a time, interspersed with terminal interaction? If so, this game is for you. For the rest of us, we’ll stick to games that don’t give us eyestrain. As someone who isn’t a fan of the genre, I’d rate this a 65%, only appealing to fans of the genre.