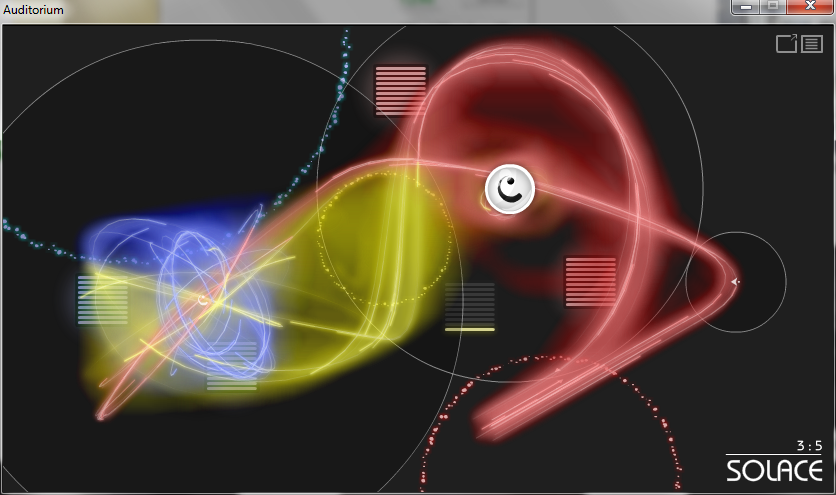 I love music games. This isn’t because I used to work for a company that made music games either, I’m just into the combination of music and game. It’s perhaps an irony then, that I tend not to be particularly good at them. You could say I was downright awful at Space Channel 5. I hated DDR (loved the music though.) I did have a very good run with the Guitar Hero franchise, but times have changed. Another ten years past what was retro makes it hipster. In another ten years the subject material will be completely foreign to the average gamer (provided populations continue to expand, i.e. barring zombie attack). As we all age, so do the games we take with us. This is the long-term benefit of having been on steam for a decade. 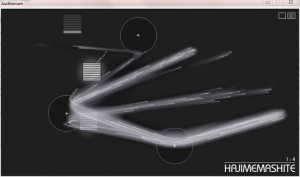 But I digress, I’m playing Auditorium on Desura. And it looks like a rhythm game. I suck at rhythm games. So I go into Auditorium with high hopes; and expectations tempered by years of failure. I have both keyboard/mouse and 360 controller at my disposal, and I really hoped it would support controllers. It turns out to be a mouse-oriented game, though it’s also available for the PS3. I think it would feel right at home on a touchscreen as well. 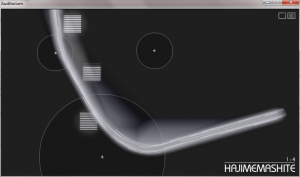 The interface is very minimal, with little explanation of what it all means. In the settings menu I think I changed the location of a mini-map. There are absolutely no pop-ups or helpful text over any of the icons you are presented with. It feels like a flash game. It’s fun though. It inspires a very zen-like state, moving “gravity pebbles” to divert streams of something into a health-bar like structure that fills up and plays music. I’m starting to think that I got this game free with an album or something. It feels very flash-game music experiment. Each item in your stream plays a note when it hits one of the level-up areas. Each has a distinct musical tone or melody. The faster you fill it up, the louder it becomes. The level of audio feedback you receive is excellent. Every action can cause a ripple of colors and sounds across the screen. 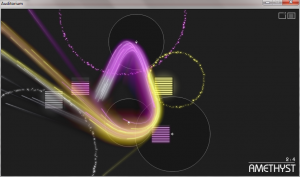 With the nature of the game being the complex interplay of gravity on streams of … something, there are may ways to solve each puzzle and move on to each level. As you progress in levels, more game mechanics are slowly added into the mix. Fairly early on the idea of musical ‘colors’ is introduced. Much like eating a crayon, these color areas dye your stream to a variety of unnatural colors. Level-up areas become color coded and can only be filled up by streams of the same color. This adds a much-needed layer of depth to the game. Though the puzzles can range from simple to mildly difficult, at times it feels like you’re meant to musically explore each “level”, which is really just a blank canvas and a number of gravity stones. 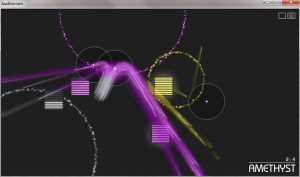 In many ways Auditorium is as relaxing as it is challenging. Its zen-like qualities and pleasing melodies slowly win you over. As you strive to complete each level, slowly moving gravity fields and watching the interplay of notes, you hear each melody growing stronger. 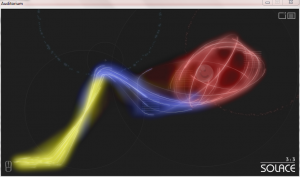 Colors flash across your screen in swirls of music. Each song becomes a level, and each level becomes a track in an album you’re playing through. 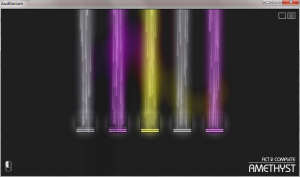 You want to complete each level, and the music feels like it’s driving you to that goal. By the time you get the ‘swirl’ gravity pebble, your screen is all sorts of crazy. The cacophony of notes and lights makes for an engrossing experience. It’s all very groovy, if you’re into that sort of thing. It feels like fantasia, the game. 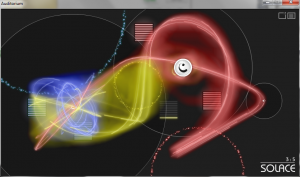 I though the interplay of music of visuals made for an engrossing, if not particularly user friendly experience. I give Auditorium a solid B+ 88%. I thoroughly enjoyed playing it, and it’s relaxing in its own way. It doesn’t feel like it should cost 7$, but if you see it for 5$ feel confident that it’ll grab your attention for an evening or two.