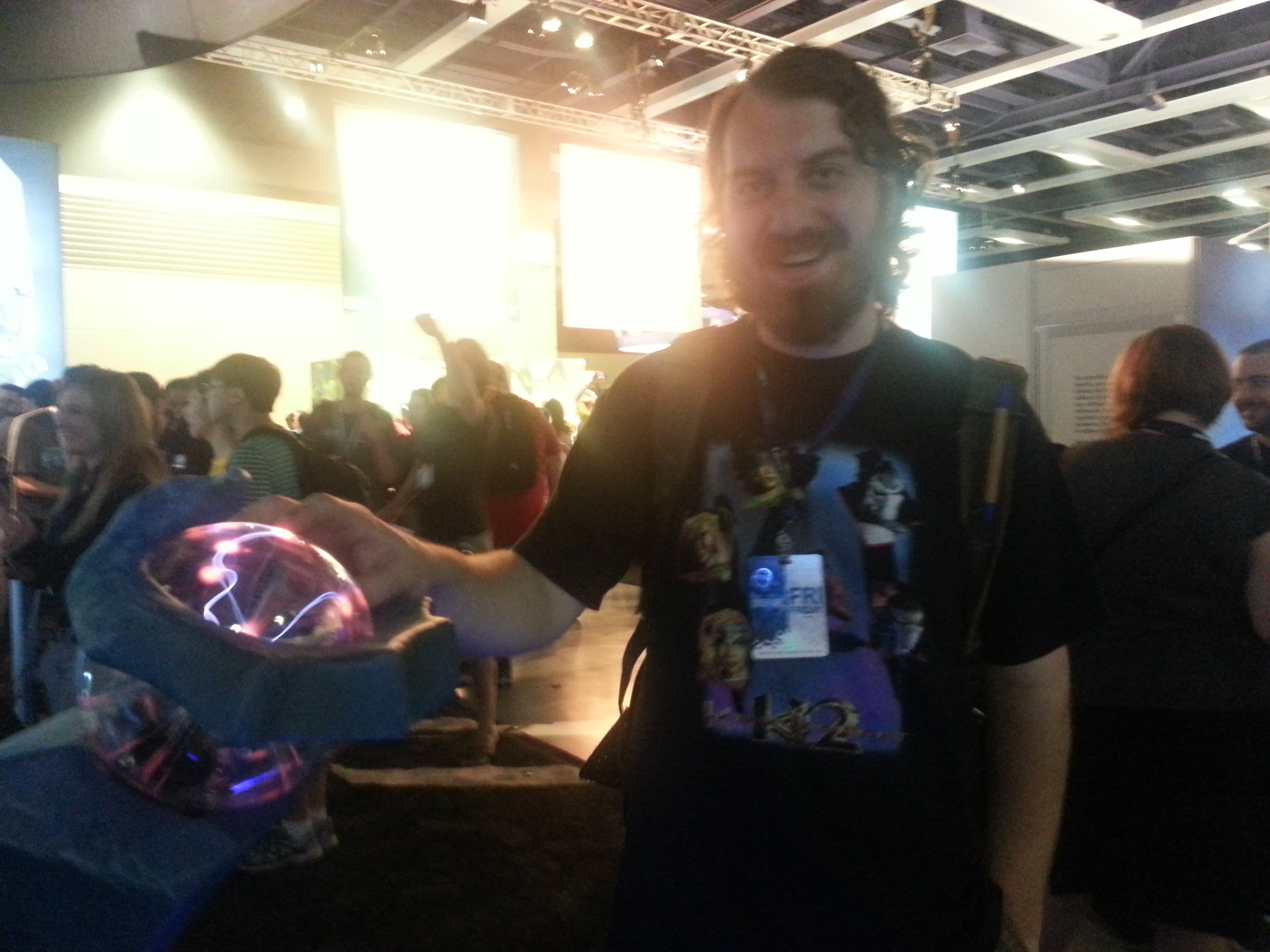 Right off the bat I have to say, PAX was a blast. 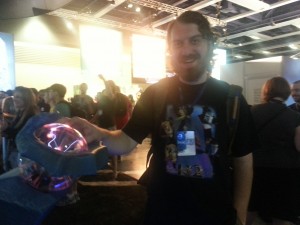 This was my first year, and I wasn’t 100% sure what to expect from such a large gaming convention. 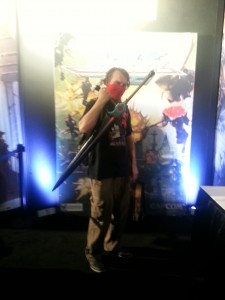 What struck me, so many times, was that this group of people wasn’t any different (save for the cosplayers) than any random group of people I see in my office building every day. Everybody games. 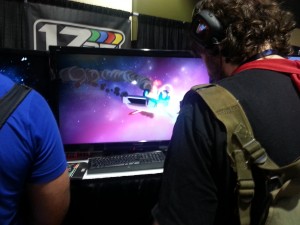 The ages skewed from teens to thirties with outliers far far out in either direction. I saw more than a few babes, literally. One thing that I didn’t see: Xbox One. Not that it wasn’t there, just that the lines were too large and too few, and I didn’t have enough sustained interested just to play Titanfall. No thanks. I’m done with Microsoft anyway. Nintendo/Sony seem to have the right attitude towards Indie developers right now, so that’s where’s I’m at. Never thought I’d say that, but that’s the state of things. 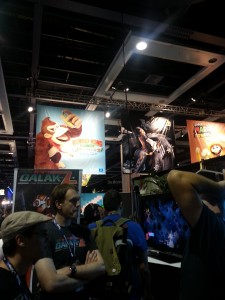 The PS4 however, I saw again and again. Very short lines. Why? Indie game alley. There’s a section of the convention devoted to my favorite segment of the game making populace I like to call Indie game alley. It reminds me of start-up alley, with each indie game developer pitching their wares. You buy the merch here rather than getting it for free like the rest of the convention, but you feel better about doing it than at Capcom’s overpriced collectible store. Capcom did have some fairly unique/cool items for sale in said store, but they all seemed a bit overpriced.

So I’m in indie game alley, and I’m playing an awesome game from a japanese developer about a couple of aliens who make soup. It’s a co-op game, and you work to build robots to help you make soup to build larger factories that make soup and so on. The visual style was fun and the gameplay was a blast. It was a mix of terraria (mining blocks in 2d side-scrolling), and a simulation game like SimTower. There was another great game I was playing that was essentially an awesome anime version of asteriods. It had me hooked, but I noticed something. The controller had a touchpad on it… Wait a minute. Was this a PS4? 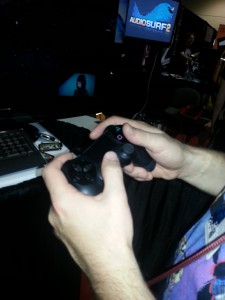 Yep, it was. The developer of the game confirmed it, not that he needed to. The controller is pretty unique. I also began to realize that during the course of the day I’d played on this controller a number of times. I played on a Nvidia Shield (and loved it.) I’d also played on innumerable android and iOS devices. I used many Xbox 360 controllers, but they were all hooked up to PC towers. Never got close to an Xbone. I wasn’t just playing indie games either, I was hitting all the heavy hitting studios, and I also played innumerable games I backed on Kickstarter. 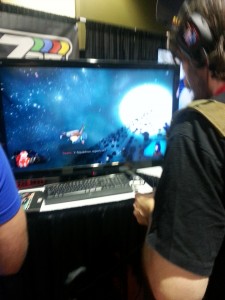 Other standout games included Audiosurf 2 (awesome!), Saints Row 4 (I know, I know, I’ve reviewed it already, but I got a free teeee-shhiirrrrrrt), Infamous: Second Son, a new Wolfenstein game, Stryder, and many many indie games. There were even a couple of fun rhythm based crossover games (rhythm dungeon crawler, rhythm space exploration, rhythm platformer, etc.) Oh and I set a world record for an upcoming Android pinball game. They gave me a ribbon. It was fun. 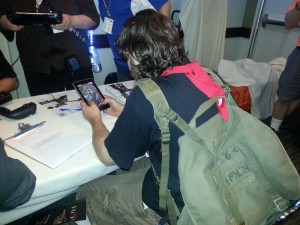 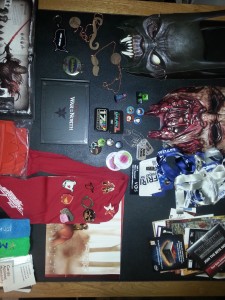 8 Pinny Arcade pins, headbands, masks, a sweet Stryder scarf, a couple of very nice art booklets, lots of little trinkets and keychains, some great cards against humanity cards, and oodles of business cards(so many job offers, seriously if you’re a programmer just head to PAX and mention what you do.) 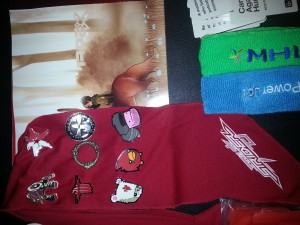 I would heartily recommend PAX to anyone, of any age. There’s so much to do, so much camaraderie. 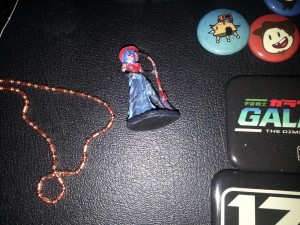 At one point during a “paint your own miniature and keep it” giveway, I accidentally exploded a container of red paint all over 4 people (including myself.) One was about 15, and another was a heavily costumed cosplayer. 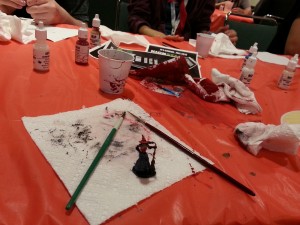 They all just laughed it off, no big deal. PAX is about fun, and gaming together. The convention is littered with areas dedicated to various forms of multiplayer gaming. Sometimes I’d be standing in line, the sound of the Super Mario theme coming through a wooden ocarina held by a very good Link cosplayer. It would all just click. So many people. Everyone gaming, having a good time, being positive. By the end of the day I was exhausted but elated, covered in buttons, weighed down with swag. If you can, you should go. 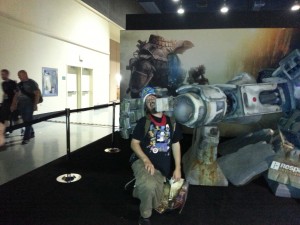