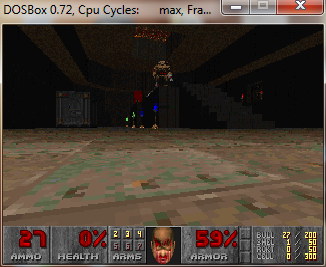 Hell has returned to earth! The excellent post-credits scene from Doom sets us up for the action in Doom II. Back when Doom II was originally released, I was beyond excited to find out what happened after the events of the original Doom. The storyline, minimal though it was, had me hooked. Does it hold up now, 20 years later? 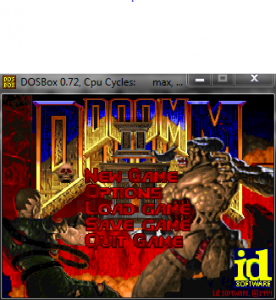 Well, yes it does. It’s like the original Doom, but with the weapons and challenges amped up a bit. It feels like the puzzle element has been toned down a bit and the action element turned up to compensate, which is great.

It also feels, if anything, a bit more lighthearted than the original Doom. You’re back on earth and fighting demons (there’s blue water and double barreled shotguns now!), but the tone isn’t that of despair. The background music is often upbeat, feeling almost merengue at times. Perhaps it was a sign of the ever-changing social mores of the gaming public, but Doom II feels more self-aware than the original Doom. Like it knows that the cartoon rabbit-on-a-spike covered in red square pixels is far less shocking that it was when Doom was released. That flaming demon heads and pink pig-demons weren’t as scary in a world with Resident Evil and System Shock. 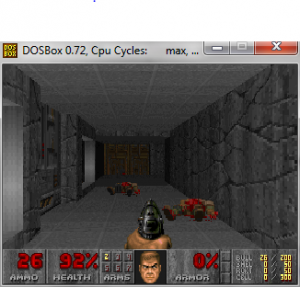 Still, the game remains a tough and enjoyable slaughterfest through 20 levels of demon-infested earth. The gameplay still feels speedy, and though dated the aesthetic is far more varied than the original Doom. This feels like a true sequel, with enough additional gameplay and level variety to justify the cost of a new game. Even today the additional variety and faster weapon progression hold it apart from Doom as a singular experience.

By the time you’re at level 20 staring at a spider demon, and a rocket demon (two bosses, woah!) you’ve learned the true rules of Doom II. The ones they don’t print on the box, but everyone knows by heart after many hours of play. The real knowledge that is gained from gameplay.

Rule #1: Nothing Comes For Free
If you’re walking along and you see some free armor, you for sure know that’s going to trip a switch and send some hellspawn your way. You don’t just get free armor! Come on man, what are you thinking! 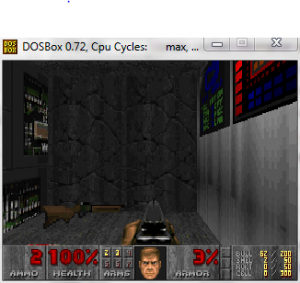 Rule #2: Fortune Favors the Bold
If you’re looking to discover all that Doom II has to offer, then you’ll want to have as many weapons as possible, and early. The best way to do this is to seek out groups of enemies to kill. You’ll often find a switch or a secret wall nearby. It’s a finely crafted feedback loop. Find weapons, use weapons to mow down hellspawn, find better weapons. Feeling a little wimpy? Go searching for a group of enemies. Counter-intuitive yet it works. 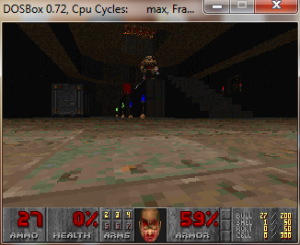 Rule #3: Save Your Game, but Not To The Detriment of Fun
You can save your game at any time. There is no restriction on when you can save whatsoever. Save during a game over screen if you want. However, there is a point beyond which you are taking away something vital from this game. You’re supposed to die. You’re supposed to get frustrated, get better, learn from your mistakes. If you’re just quick-loading a few seconds prior to every death you’re not learning anything. You’re missing the point. 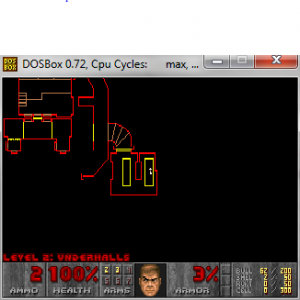 That said, (and this segways nicely into rule 4), after your first playthrough this is a great way to work on your speedrun time.

Rule #4 (My Favorite): This is Your Game, and Your Are Encouraged to Hack and Cheat
There is no ‘cheat console’ in Doom II. You just type in a cheat and it happens. There’s one level that’s done up like the original Wolfenstein that you can only get to via cheat code. Cheat codes, for many, were a way of extending gameplay and adding a new level of fun to a game you’ve played through. They are also an alternate way of providing a ‘very easy’ mode. Doom II also follows the original Doom in that there are countless mods, maps, weapon packs, and total conversions for Doom II that you can still find today. As Id software long ago released the engine source code for Doom II, you don’t even need to purchase the game to play these. Gotta love open source. 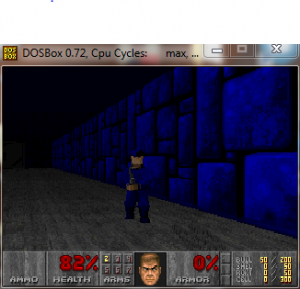 So is Doom II Worth 5$ in 2013?
If you’ve played the original Doom on Steam, it’s likely Doom II: Hell on Earth was also included in that purchase. So for that segment of my readers, the question becomes “is Doom II worth playing?” and not “is Doom II worth buying?” That’s an easier question. Of course Doom II is worth playing! It’s Doom on steroids with a bit of extra mirth. So play it. 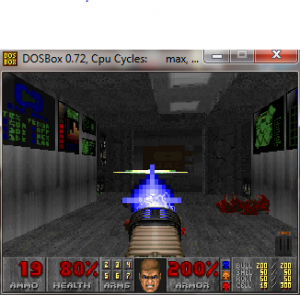 For everyone else asking is Doom II worth buying? Yes. If you’re a fan of the genre, it’s a must own. The graphics may be dated, but the gameplay, pacing, and overall level of fun are timeless. A solid 80%, even all these years later. Pick it up in a bundle with the rest of the Id software classics for extra savings and many hours of good times.