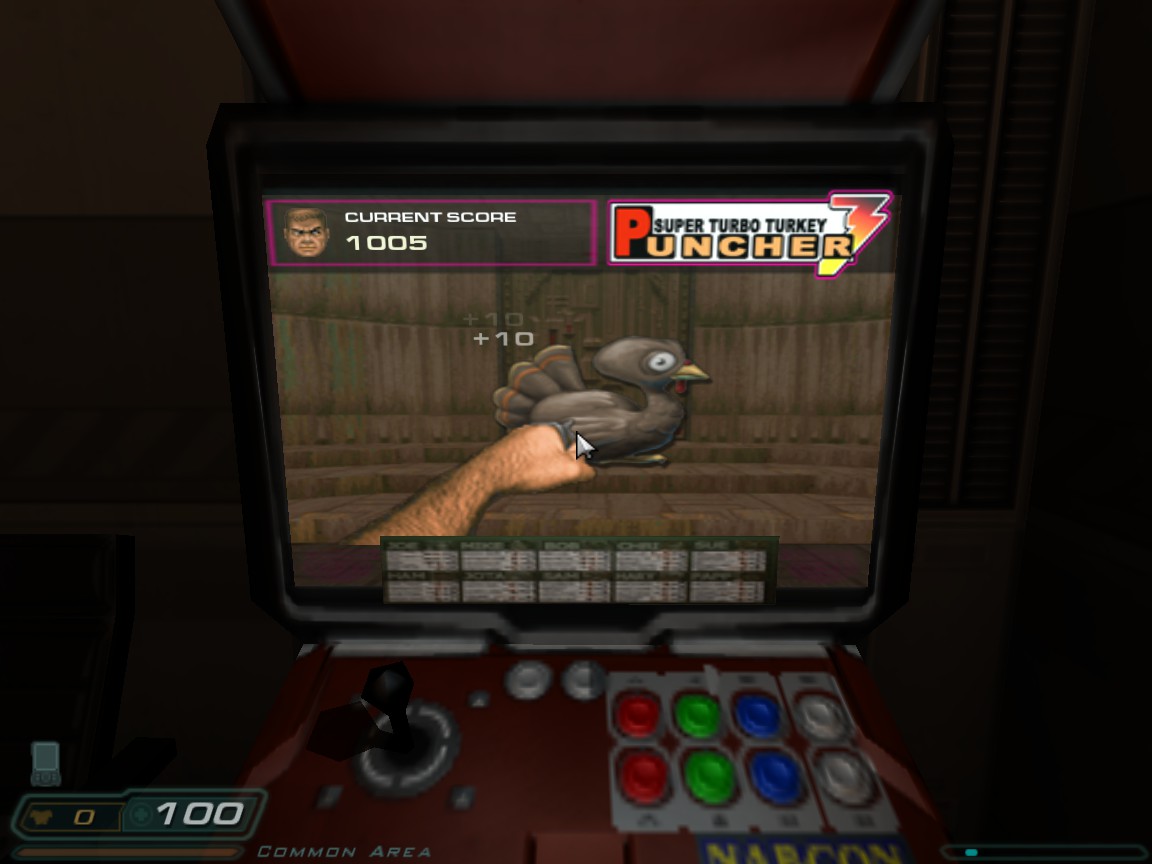 The year was 2005, and it was spring. I had been working at my first post-graduate programming job for about 2 years, and my PC was an aging Pentium-3 600. My graphics card, a Geforce TNT-2 that had managed to sustain me on (very) light gaming until then. It was time for an upgrade. Why? Doom 3 was coming out. 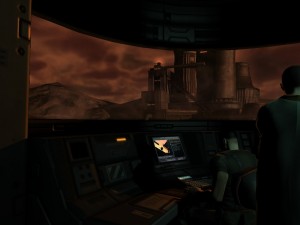 As you may know from my previous articles, I was big into Doom and Doom 2 back when they were released in the 90s. Then again, in the 90s I lived far into the country, had few friends, fewer dollars, and way too much spare time. Doom 3 was released almost a decade later, when I lived in the city with my future wife, already had my first degree and a good job, and precious little spare time. Did Doom 3 deliver on the ten year wait? 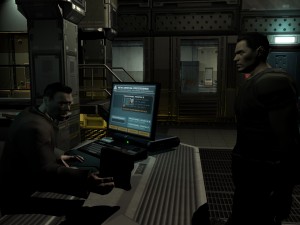 Hell yeah it did(pun intended.) Doom 3 was a tour-de-force, and the motivation behind a generation of pc upgrades. Doom 3 itself sold three million copies, and who knows how many millions (billions?) of dollars were spent on the pc components necessary to run it. To REALLY max out Doom 3 was impossible with the hardware of the day (for about a year or so), but to play Doom 3 reasonably you’d want a Pentium 4 or Athlon and a Geforce 8400 or Radeon 9550.

So for me, back around the 2004 holiday season, my feelings about the upcoming Doom 3 were conflated with those of my first large hardware upgrades, which at the time was a very enjoyable experience. I recall purchasing a very fast Sempron processor and a Radeon 9800 graphics card, perhaps the most expensive graphics card I have ever purchased at ~350$ at the time. 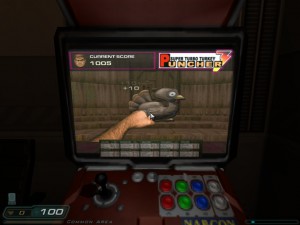 Fast forward to 2013, and you have a very different landscape. It’s been 8 years, another degree, many jobs and many games have been left behind. Oddly enough, I’m still gaming on a CPU that was released back in 2005. I spend a great deal less on my gaming hardware than I did back then, in fact much of it comes from thrift stores. My 1600×900 resolution monitor was 10$ at the Value Village near my house. I re-purposed my wife’s old slim pc (circa 2006) as my gaming and review rig earlier this year when she upgraded to a new i7 laptop. I threw that tiny motherboard in a nice big gaming case and never worry about overheating. I paid 30$ for that case after rebate. I paid 130$ for my gaming review card, a Radeon 7850. I paid 35$ after rebate for my 750 watt “gaming” power supply. Even on an 8-year old CPU most games still scream on high settings. CPU speed means almost nothing for anything but emulation nowadays. Even high definition movies and web browsing are GPU accelerated now. 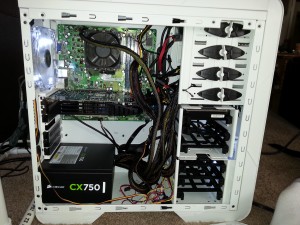 What does this mean for the original Doom 3 then, at the end of 2013? For one it means I can play through the game in 8-hour play sessions without worrying about my gpu melting. Not sure if this would be the case with the “new” Doom 3. You see, Doom 3 was released back before all of the big companies released updates via DLC. So Doom 3 saw one expansion pack upon it’s original release, and then nothing for 7 years until earlier this year we got a graphical update and gameplay re-balance in the form of the “Doom 3 BFG Edition” release. While that game is on my list of games to review (and I do own it), I’ll be reviewing the original Doom 3 as it was released in 2005. That means no flashlight mod. 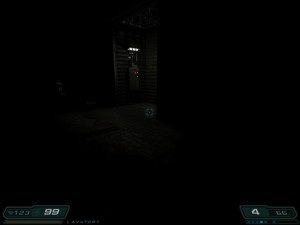 For those who didn’t play the original Doom 3, the flashlight mod is the ever-controversial game mod that allows you to use both your flashlight and your gun at the same time. Doom 3 did not allow this upon it’s release. It made for a very tense, difficult game that was at times quite frustrating. 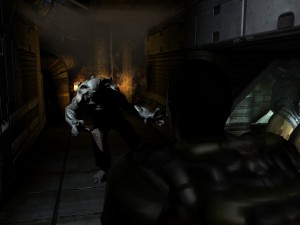 It was also very dark and atmospheric, with colored lighting effects everywhere. Critics claimed the lack of a flashlight served more to force the player to experience the new game engine and these lighting effects, rather than the game itself. I’m not convinced that’s the case, but I’ll leave that discussion for later. 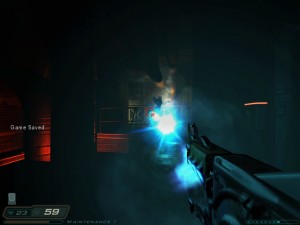 This game still has the capacity to creep me out. Whether it be bloody half-mutilated bodies nailed to the ceiling, demon spawn which appear from the blood-soaked shadows, or just the soft whispers of ‘help me’ or ‘oh god’ which seem to pervade the experience. 8 years later, Doom 3 still has the power to unsettle. 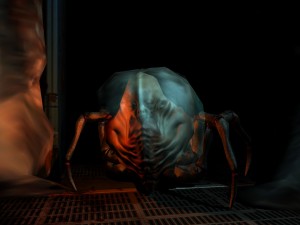 It’s a full retelling of the original Doom story, and serves to put the simplistic storyline of the original (Marine on Mars kills demons) into a full on horror setting with the demonic aspect cranked up to 11. 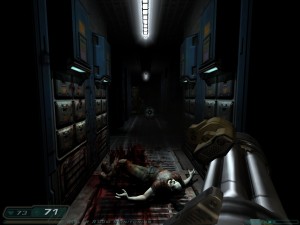 Lots of little details help add to the overall ambiance. Character emails, voice records, video data files and the like are scattered throughout the levels, and provide clues and weapon lockers codes. This keeps the user engaged in the storyline, while simultaneously rewarding the player for seeking out this additional content. 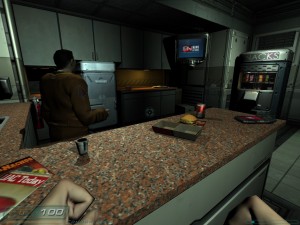 The graphics remain as gory and satanic as ever. Enemies explode and disintegrate into a bloody pink mist of hellfire. You’re constantly hearing whispers and dark incantations. This is not the game to play late at night home alone, as it may freak you out. Enemies jump out at you. The decaying space station you are on slowly falls apart around you, hellspawn crawling out of every hole. 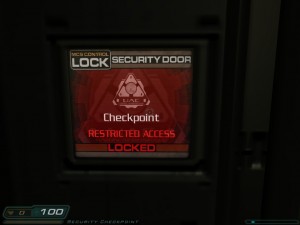 Everything you loved about Doom has made a return and has been augmented in some way. Keycards now are stored on PDA tablets (iPADs a few years early.) All of your favorite enemies from the first games have been visually and physically upgraded and are just as mean as ever. These upgrades serve both as fan-service and as a boost up in the difficulty of each enemy. As such, the amount of enemies you are fighting at any one time has decreased somewhat from the original games. While you may encounter a dozen or so enemies at one time, it’s quite rare that you’ll fight anything close to the legions of enemies the first game threw at you. Doom 3 makes up for this by amplifying both the difficulty and the creepiness factor of each enemy significantly. 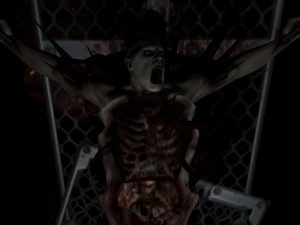 A good example: in the first game, you just see these floating, flaming skulls coming at you. In Doom 3, it’s a fully flushed out story item, and it’s creepy as hell. Shortly after receiving the plasma gun you break into a security room where a woman is crying for your help. Then next thing you know, her head is combusting and her spinal column is removing itself from her body. Watching a person screaming for help before their head catches on fire and detaches from their body is very, very creepy. 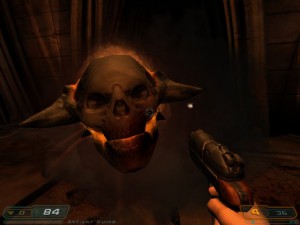 The creepiness is just a feather in the cap of an overall quite excellent game. From the amplified and dark storyline to the updated graphics and interesting enemies, Doom 3 is still an excellent horror-action FPS that holds up to the standards of 2013. While the graphics are no longer jaw-dropping, 8 years later they remain an impressive and visually engrossing experience and vital gameplay item. Considering its bargain-basement price (and inclusion in many bundles) I highly recommend playing through Doom 3. I rate it an 88%, excellent. 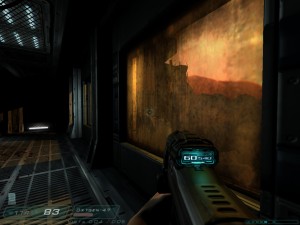 I’m also including Resurrection of Evil in this review, because it’s really just a short level pack addition to Doom 3 with one great boss battle at the end. It also is generally only sold bundled with the original Doom 3, and in my opinion should be considered part of the original release. There’s not much to say about D3ROE other than it does have a great boss battle at the end, and it’s worth playing through even after you beat Doom 3 just for said battle. Given it’s short length and lack of significant upgrades (or character development), I’d have to give D3ROE a slighter lower score of 83%, just shy of it’s big brother’s score.