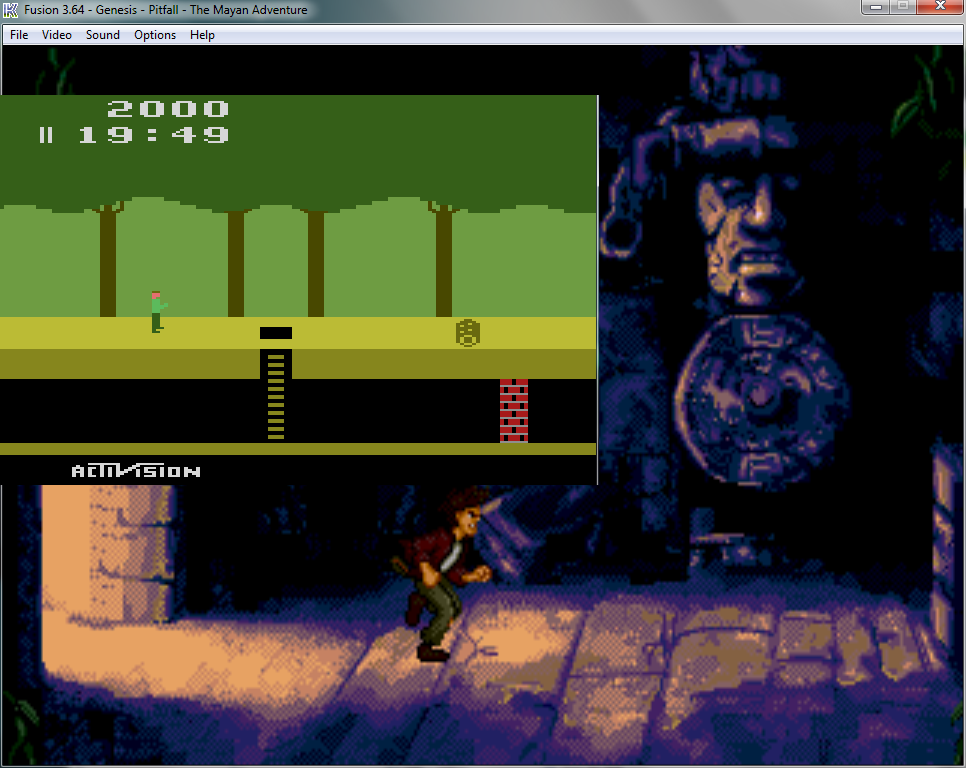 I did not have an Atari when I was young. My first console was the NES, so I have never played Pitfall on a console. I did play it on my friends commodore 64, a machine which holds a very special place in my heart as the first machine I ever typed a computer program into, way back in the late 1980s. 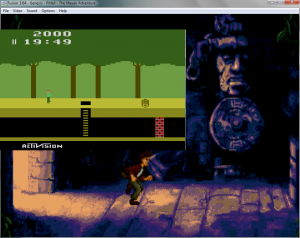 Nevertheless, I’ll be reviewing the Atari version, as I believe in only reviewing games which I own a licence or physical copy of. I also found the Genesis version of Pitfall: The Mayan adventure, so I’ll be reviewing both in a 1-2 review. I don’t currently have a licence to Pitfall 2 for the Atari, but I’m looking the best deals. 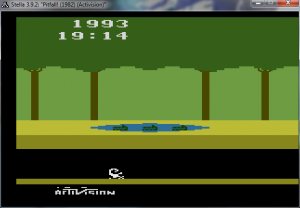 No title screens. No bosses. No save games. Fiendish difficulty. Minimal graphics, minimal sound. What’s to like about the original Pitfall for Atari? 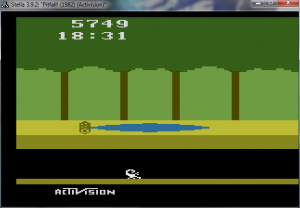 A lot actually. There’s a feeling of adventure. A feeling of make or break adventuring. There’s a brief ‘do da doo’ noise every time you ride on a rope that I assume was meant to sound similar to Indiana Jones. All-too rare rings give you an extra life. You’re just out there, exploring the jungle as hidden lakes and quicksand appear out of nowhere and threaten to drag you under. 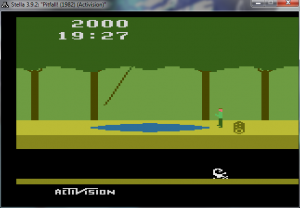 You’re constantly assaulted by snakes, invisible lakes, quicksand, scorpions, and time itself. You get 20 minutes total to beat this game, but I’ve never made it past the fifteen minute mark during real gameplay. 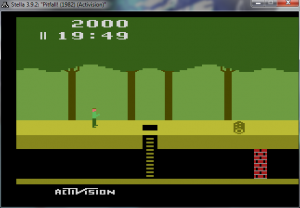 It’s tough, minimalistic, and an absolute classic. Most if not all modern platformers owe all they have to Pitfall. Though it may not be worth a dollar in modern gaming terms, it likely won’t cost you more than 15c in one of those “80 Atari games for 5$” collections. Well worth your time at 15c, I’d rate it a 67% by modern gaming standards. Fiendishly difficult but rewarding in a minimal sort of way. 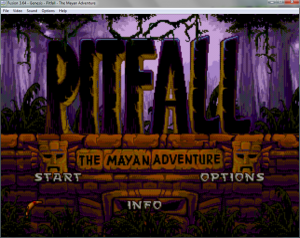 Pitfall: The Mayan Adventure is a 16-bit era update to the original Pitfall… but is it in name only?

No. While much has changed, there’s much that’s the same. While you traverse the landscape through larger level areas, you still are basically just searching the jungle left and right. You can use a slingshot and various weapons to kill snakes now, but hidden water traps still threaten to drag you to a watery grave at any moment. 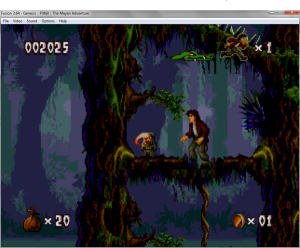 The timer is gone, which is good. Everything has been updated. The graphics look good, even for a 16-bit era game. They still hold up well 20 years later. They’re a little cartoony, a little gritty, not too pixelated. Everything you want from a retro side-scroller.

The sound effects are pretty standard, but nothing to complain about. The music is a surprisingly good collection of jungle-themed chiptunes. 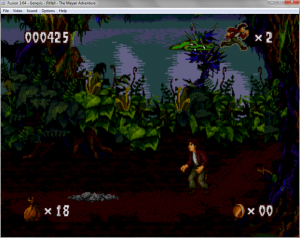 There are some fun little easter eggs too. Like many games of the era, you’ll get a fun little animation if you stop moving for too long. 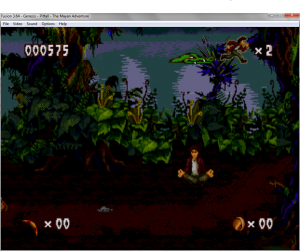 There is a lot that’s changed since the first Pitfall. There’s more opportunity for backtracking, as the difficulty level has been cranked down quite a bit. It’s still a difficult game, but it’s not legendarily difficult like its predecessor. 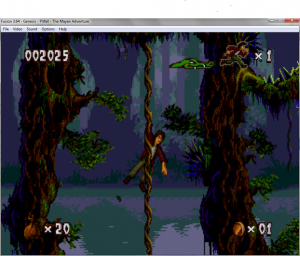 It’s also a bit of a weird game. You’re throw straight into the typical side-scrolling tropes quite quickly. The sand traps. The bouncing spider webs. The spider monkeys that throw .. something at you. You find hearts (real human hearts) floating in the sky as power ups. You hang from what look like giant bouncing uvulas (I reaaaaly hope they are uvulas!) 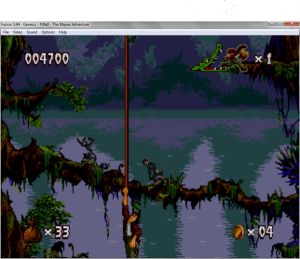 There are levels now, discrete blocks of gameplay that separate out. There are also level bosses. Wild animals that require many hits and some agile maneuvers. The difficulty level is still very, very high. You start out with 3 lives and three continues, and you’ll need each one. 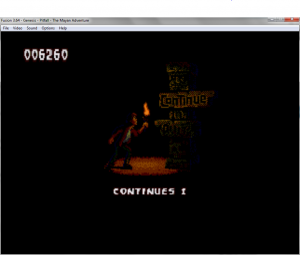 You’ll still need to be able to jump gators and swing on vines, but you’ll also need a great deal more varied platforming skills to make it to the final level. 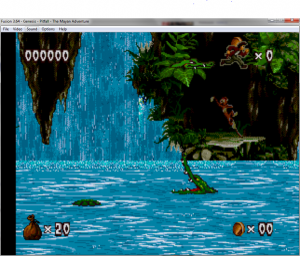 Then again, you can always use the level select cheat. Pitfall: The Mayan Adventure came out at a time when cheats weren’t part of DLC or cost a fee. They were included as a way to add additional gameplay, as well as an easy debug option for testers. In any case, you’ll at minimum want to use one of the ‘increased lives’ cheats to get you through, and the level select code to experience the mine-cart level. 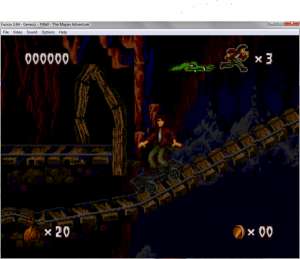 Best of all, there’s a code to play the complete original Pitfall game on your Genesis. That’s like getting a pretty decent Atario game with your shitty Genesis game, bonus! 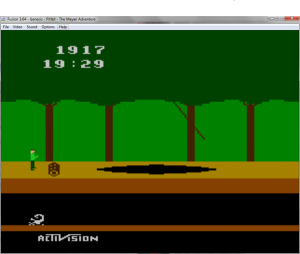 While there is a fair bit of gameplay, the difficulty level is set squarely in the ‘retro hard’ category. The inclusion of level select and extra lives codes alleviate this a bit, but do nothing to make the core gameplay truly fun. It’s a generic 16-bit platformer dressed up in Pitfall clothes. All that’s difficult isn’t classic, or memorable. 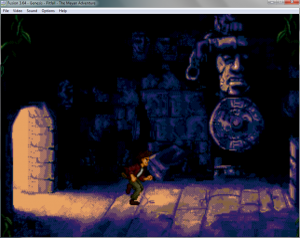 Is Pitfall: The Mayan Adventure worth your time? Well that depends. You can likely pick up the cartridge for 3$ on eBay. It’s probably worth the 3$ if you’re into retro platformers or a fan of Pitfall. There’s a fair bit of fun and a smidge of varied gameplay to be had, even if it is a bit bland. Sadly, the best part may be the inclusion of the original Pitfall as an unlockable cheat. I’d rate Pitfall: The Mayan Adventure a 65% by modern standards. A middling platformer that’s not particularly worth remembering.