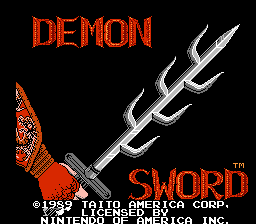 When I was 9 years old it was 1990. I was renting Demon Sword for the second time. Prior to this the only games I rented more than once were Zelda 2 and Mario 2, for I had the first ones in the series and wanted to see how things had progressed. Why then, was a broke little 9 year old spending his quarters on renting a side-scrolling ninja-punishment game for a second time? 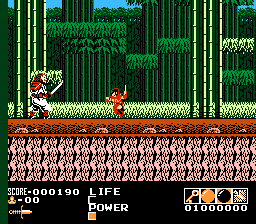 The answer is that I had simply forgot that I had ever played this game. Only after beating the first couple of uber-difficult levels did I realize, “I played this one before!”. That sticks out in my mind, even now 23 years later. 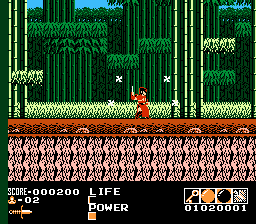 Imagine my delight when I saw Demon Sword at the thrift store for 2$ (about what you can get it for on eBay.) Does it hold up all these years later? 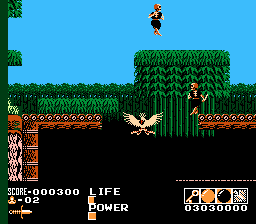 In a sense it does. While punishingly difficult and sadly a bit too short, there’s a lot of variety to be had in the way you play through the levels. Your sword and throwing stars will be upgraded automatically as you move to the later levels, so if you wish you jump through the trees at high speeds and go straight to the boss with no magic, you can. You can also fight the never-ending horde of ninjas who fly at you from all angles below the treetops, on the ground, and in the ninja-infested caves below the forest. They drop items which refill your health, give you super powers, and temporarily upgrade your throwing stars. So there’s something for speedrunners and grinders alike. 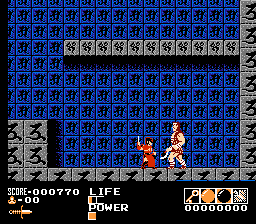 That’s not to say all these items won’t keep you from dying over and over. Demon sword is a difficult, frustrating game. It stands as a testament to the overall difficulty level of most games of the era. It allows you to go so far, then crushes you and sends you back to a re-spawn point. Those 3 lives are precious few, and the sword you fight with for the first 2 levels is a butter knife of gaming legend. 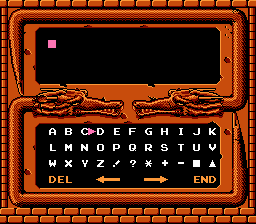 Unfortunately you can understand why the developers hid the password option, the game is just too short. When you finally rocket to the boss at the end of the fourth (yes fourth) level, you’re wondering where the rest of the game is. Having a password based save system is great, but it does exacerbate the extreme shortness of the game. This game makes the original Mario Brothers seem like an epic adventure (not that it wasn’t, but I’ll get to that another review.)

In the end, the game is too short to be called a true classic. It’s fun, and the box art features Arnold, and you’ll get your couple buck’s worth. Just don’t expect to remember the nuance or feeling of adventure 20 years later. A somewhat solid 68%, decent. 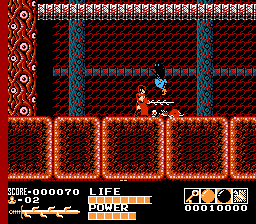