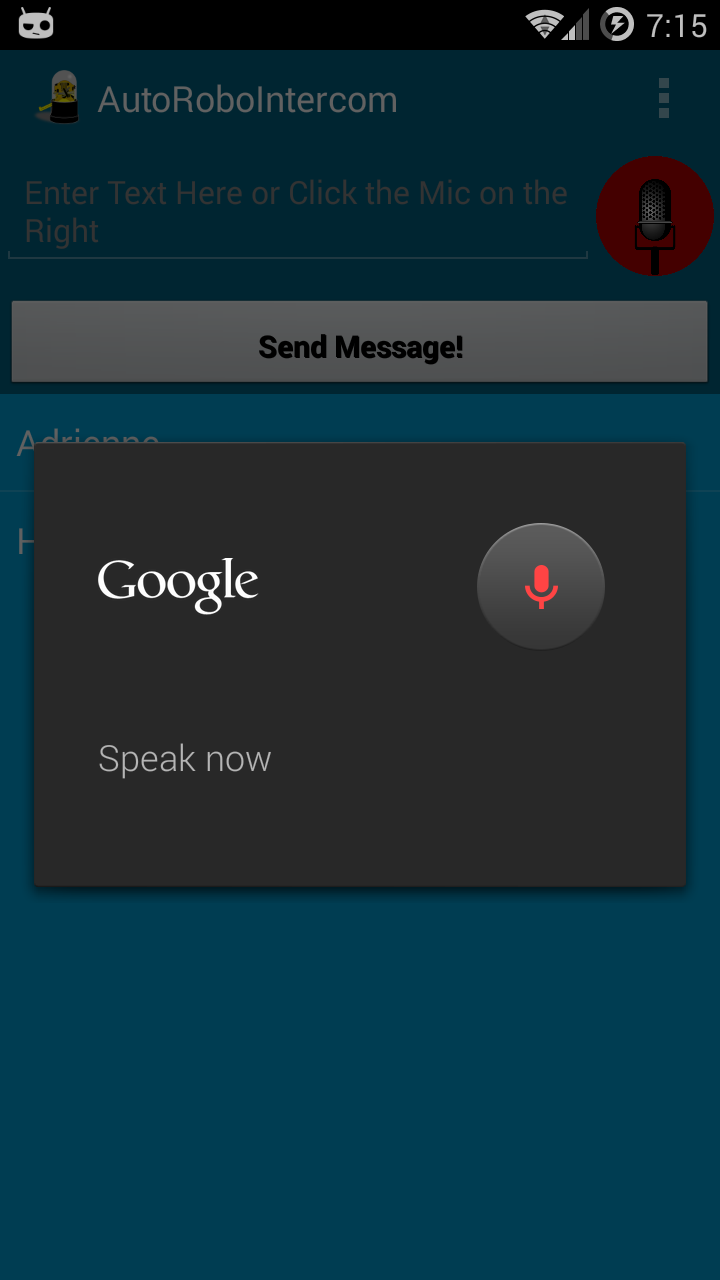 I’ve finally figured out what folks can do with those 4-year old Android phones, and I’ve just finished writing up version .01! Announcing my newest “pet project” AutoRoboIntercom!

AutoRoboIntercom is your basic auto-discovering intercom system, with a twist or two. It can be used without an internet connection, and won’t compromise your security.

Simply load AutoRoboIntercom on your Android 2.1+ device and connect it to your Wifi network. You now have a robotic intercom system. That’s it, no configuration necessary (though you can set your room/user name from the menu.) 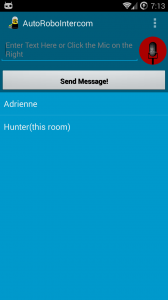 You can type or talk (speech to text) and it will be broadcast to all connected clients on the network. Clients hear “(Name) said (Message)”.

This means AutoRoboIntercom can be used as an intercom system using old phones around your house, or an ‘around-the-house’ type intercom system using the phones in your pocket. You never need to think about domain configuration or pay for some proprietary software that will probably spy on you later.

So for example you’re in a house with 5 rooms, named:
Hunter’s Den
The Garage
Sallie’s Room
Jen’s Room
The Kitchen

Hunter has just finished work on his latest app, and wants to let the rest of the house know it’s done. He taps the ‘record’ button in AutoRoboIntercom on his ancient HTC Hero Phone (Android 2.1) and says “Hey everyone! Come check this out I just finished an app!” 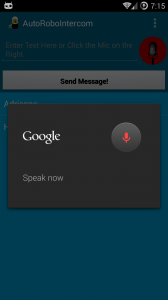 Sallie, Jen, Mom, and Ben (working in the Garage) all hear:

“Hunter’s Den said “Hey everyone! Come check this out I just finished an app!”

Everyone hears this message read to them in the text-to-speech voice which is installed on their various Android phones throughout the house. They know who said it, so they’ve got the context and know just where to go. Some reply with a “be right there!” while others just run down to the den. Hunter hears the replies in proper queue order without worrying about having to say “over” or messages coming in simultaneously like on the walkie talkie system he had back in the 1980s.

This is all working today. Right now. Ready to go. Code‘s out there. Here’s an .apk file for those brave enough to run unsigned APKs.

Being sick sucks. That’s a strange thing to put into a post about my new Android application, but it’s what caused me to delay it’s release till this evening. I spent the majority of my day being ill, when all I needed to do was write this post and push the files up to GitHub. This is done now, and the era of AutoRoboIntercom is now. 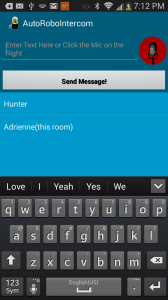 One of the cool things about AutoRoboIntercom is that it’s my first public project to use the Gradle build system. Those who are not using Gradle should still be able to compile just fine, and I’m not using any external libraries.

AutoRoboIntercom came about as a result of my desire for an easy to use intercom system which absolutely had to meet the following criteria:

I had no desire to bring in all of UPNP just for the discovery protocol, and I believe the file streaming aspect is based on http file directory protocol anyway. Likewise I had no desire to pay for a product which could potentially spy on my home or required internet access to use. AutoRoboIntercom requires Wifi, but does not require internet access. Both speech-to-text and text-to-speech libraries can be installed for offline use. This means the security conscious can install a separate WiFi network with no upstream internet access!

You could have the system’s currently playing music information broadcast out to clients as they detect your sender’s bluetooth mac address. Your music could literally follow you around the house…

Think of the possibilities! With Tasker alone comes some really wild functionality. You could use AutoRoboIntercom to message the house when one room’s temperature goes too high/low. You could have the system’s currently playing music information broadcast out to clients as they detect your sender’s bluetooth mac address. Your music could literally follow you around the house…(I mean, I DO work on Rhapsody Android client… maybe I should do this one first)

That’s some good times there! I’ll probably throw this up on the Play store at some point, in the meantime the source should be trivial to compile.