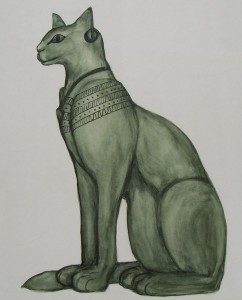 Thousands of years ago, man was the dominant species on this earth. Horses, camels, mules, dogs, all manner of beasts bowed to his might. Man tilled the earth, brought forth grain for beer, raised cattle for meat. There was no species considered greater than man, for man had conquered all.

Oubastet was a day laborer. Each day he would walk down to the banks of the Nile and take what work was available. Some days he would help to form great bricks of straw and mud. Other days he would help to float logs down the river to the city. Many days he was tasked with guarding the city’s grain stores. Each night after a hard day’s work he was paid in grain, or life-sustaining beer. He would never know the luxury of a pharaoh’s palace or the respect afforded to a skilled tradesman, but it was a good life, and Oubastet was content.

On a day like any other Oubastet was guarding the grain stores. This mainly involved chasing out snakes or cleaning out piles of grain which had been infested by vermin. Hours of vermin-infested grain-slinging labor past, and nightfall was quickly approaching in the short Egyptian spring. As the sun set outside the grain storage, the creatures who live without the blessing of Ra began to stir. The quick sharp barking of the desert fox alerted Oubastet to the coming of night, and to an unexpected visitor.

“Who is speaking!”, cried Oubastet. “This isn’t funny”.

“I have no interest in jest” replied the ethereal voice. “I’m here to offer you a path to godhood.”

“Who in Ra’s name are you?” shouted Oubastet, “and where are you hiding?”.

The sand cat, who during this conversation had remain affixed to one spot, approached Oubastet. Her teeth gleaned in the twilight, eyes aglow in the creeping darkness.

“Not in Ra’s name, but in MINE” breathed the cat. “I am Baast, protector of Ra!”

The color drained from Oubastet’s face. “My lady! What do you want with me?”

“I have a wager for you human,” whispered the cat-goddess, “and you dare not refuse the will of the gods.”

“Of course my lady!” breathed Oubastet, who had long-since prostrated himself before the cat goddess. The cat leapt up onto a nearby wall and proclaimed:

“Hear me Oubastet, Ra has taken kindly to the offerings of your people, and believes you are ready to ascend to his pantheon. He would make your kind akin to the gods, immortal, unchanging, powerful.” Oubastet’s eyes widened as the cat continued, “What Ra wishes all gods must obey, but the rest of the gods do not share his belief. You have been chosen Oubastet, to prove the worth of your people to the gods!”

“But why me, I am nobody!” cried Oubastet.

“Exactly”, replied the goddess, “You are of no consequence to your fellow man nor to the gods. There is not one among us to whom you have curried favor.”

“Then how do I prove our worth?” proclaimed Oubastet?

“Ra would have you raised among us as gods. I would have you as my servant for all of eternity, kowtowed and sniveling. You will choose which path humanity will take Oubastet. For you we offer a simple, single task. Clear out all of the grain-eating vermin from the grain storage before the sun again rises, and your people shall join us at Ra’s side. Fail, and your kind will never know the eternal light of Ra. You will be cursed to live among the beasts of the earth, eternally slaves to the will of Baast!”

Oubastet threw open the doors of the grainery, lit a torch, and began the arduous task of clearing out all the vermin in the grain store. Oubastet separated the great grain storage room into two large piles of grain. From there he separated those into four piles, then eight, then sixteen. After many long hours, Oubastet had created over 500 piles of grain. He walked between them all, killing whatever he found in each pile. Though he had killed many rats and snakes during this night, there was no way of knowing if any remained or had escaped to another pile. There were but precious few hours left until dawn, and Oubastet was facing the enslavement of his entire race. He had to act fast. The light on his torch was flickering low in the great stone hall, and Oubastet had an idea, an idea so crazy it just might work.

“Why then,” thought Oubastet, “should I care for the storage of grain if I am to be a god tomorrow?” “If I burn the grain, I’ll destroy all the vermin contained within it.” Feeling incredibly pleased with himself Oubastet proceeded to gather up all his tiny piles into one massive heap of grain. Oubastet threw a torch onto the mountain of grain and quickly closed off the great stone doors. The flames quickly engulfed the grain, and within an hour the grain store was nothing but a sarcophagus of ash.

Oubastet hurried inside and swept away the piles of ash and burnt rat carcasses. As Ra began his slow ascent through the sky Oubastet sat in the empty grain store, awaiting the return of Baast. When the sun had fully risen above the horizon, Baast slowly walked into the grain room and began to speak.

“You have failed, human, as I knew you would.”

“What, no my lady!” cried Oubastet, “I have done as you asked, and cleared this room of all the grain-eating vermin!” “There is nothing left, nothing!”

Baast snarled, her contempt for Oubastet dripping from every word,

“Look around you Oubastet, you have laid waste to the grain stores of your people. There is still one grain-eating vermin left in this room and he has doomed his people to slavery. From this moment all your people will bow to the whims of Baast, the cat god. Humans shall raise cats above all other creatures, tend to their wishes, and keep them in places of power and nobility. All of my children now revile you and reject your wishes and your teachings. Never will a cat prostrate itself to a human, and from this day forward my progeny know in their hearts they are the masters of humanity. Human lives will be filled with struggle and angst, a thousand thousand lifetimes of conflict will pass while my children look down upon you from their silken pillows and purr. Welcome to an eternity of slavery vermin, and to the everlasting rule of Baast.”