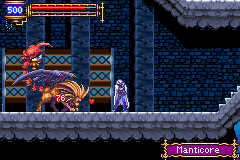 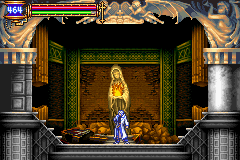 Flashback to 2002. My trusty GBA had served me well since launch. Many a long lunch hour had been spent playing super mario advance at work (don’t feel too bad for my long distant employer, I was an intern in the advertising/tobacco industry.) I read an article about an upcoming Castlevania game, Aria of Sorrow. “Man, they’re putting out a lot of Castlevania games” I thought to myself, and continued reading whatever corporate trash gaming PR mag they had in my small town.

Now flash forward to 2003. Aria of Sorrow is out, reviews are stellar. “Could it be better than Symphony of the Night?” For me, it was. 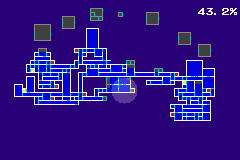 Yes, a single twist. One. For over a decade every Castlevania game that was released was Symphony of the Night + one mechanic. And don’t get me wrong, I do love Symphony. And the mechanics were mostly fun. However by the the Aria rolled around, I was feeling a bit jaded. 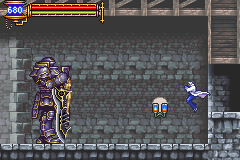 That feeling passed. Aria of Sorrow was set in the future, with a cool anime aesthetic and a single gameplay twist. You played as a man who may become the next Dracula, and you absorb the souls of the enemies you fight. You can then summon them later, and use their abilities in a host of ways. This brilliant pokemon-esque twist completely upped the Castlevania bar. 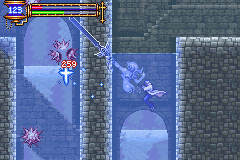 You see, as the future Dracula you can absorb the soul of every enemy in the game. This effectively means you get to use their powers as your magic attacks There are many dozens of souls to absorb, and these attacks range from “meh” to “holy crap he just changed into a demon and raced across 5 screens causing CHAOS!” and everything in between. Time stop. Familiars. Bat wings. Super strength. It’s great fun, and it keeps the gameplay engaging and fresh through each playthrough. 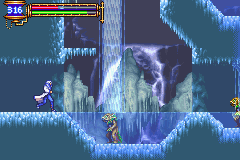 How is this accomplished? Each of the monsters may randomly drop their soul, and often they don’t. So, if you’re not trying to grind souls (to get the very very best ending which is essentially just the good ending with a happier tone), you’re going to get a different set of souls through each playthrough. This means your gameplay style may be completely different each time you play through this roughly seven hour game.

One of the qualities that I most enjoy about a properly done exploration mechanic is “depth when you want it.” That is to say, it’s not required that you explore every nook and cranny of the castle to get a good ending (the best ending perhaps, but not a good ending.) You can still fight all the bosses, collect souls, get a good ending, and have a great time without meticulously exploring every secret area and obtaining every hidden soul or item. That said, if you’re into that Aria of Sorrow has some really fun souls hidden behind small puzzles. 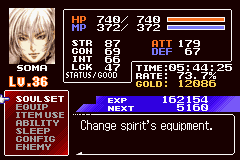 The sound is classic 16/32-bit Castlevania sound, nothing to complain about. The graphics are crisp and fun, filled with large character sprites and a myriad of super moves. This latest play through, I focused on flame weapons and swords. My next, I may have an imp that follows me around as I hide in the shadows, allowing him to distract the enemies while I throw soup at them. Yes, there’s a bowl of soup throwing demon soul. That’s good times. 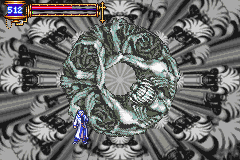 In the end, even 11 years later I supremely enjoyed my latest playthrough of Aria of Sorrow. I rate it 93/100, a true classic that stands the test of time. 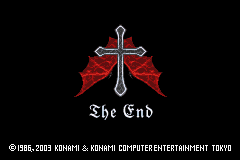