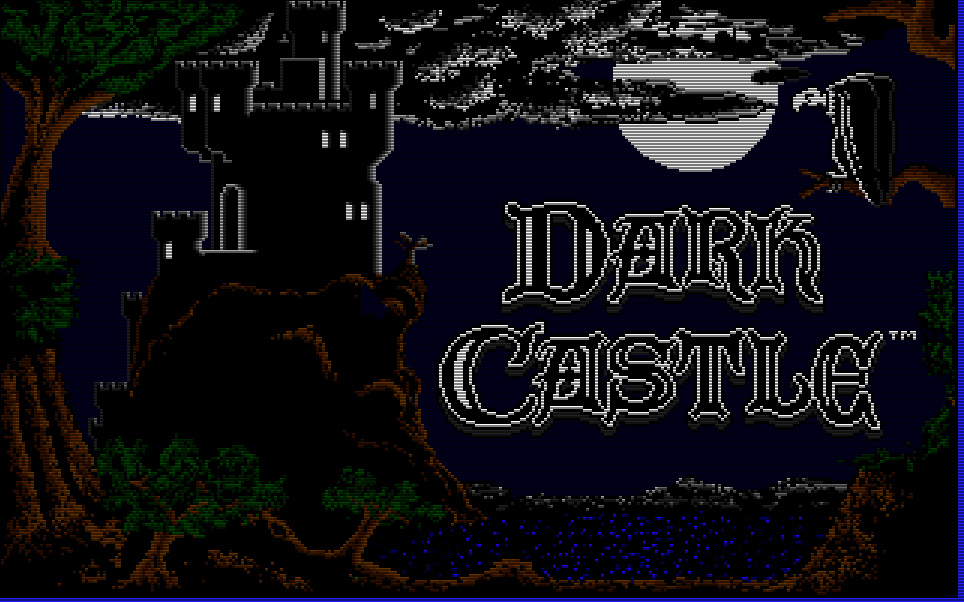 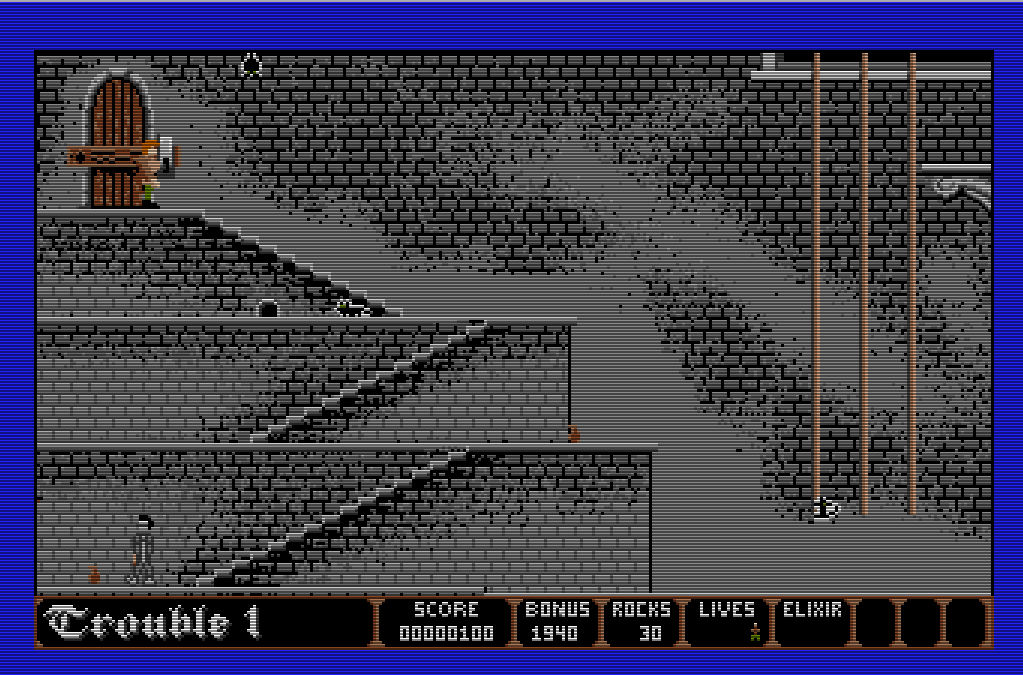 Do you hate the comforts of modern platform gaming? Long for a time before Jill of the Jungle and Commander Keen showed us how smooth and responsive a PC game can be? Do you enjoy attempting to emulate versions of MacOS from the 1980s? Then have I got a game for you!

Dark Castle is a classic MacOS platformer that first showed the world what decent 2d platforming could be on a classic Mac. It’s also a reminder of just how far we’ve come in these past 30 years.

Use your mouse to swing your rock-throwing arm while you move and jump across single-screen platform hell. The controls feel stiff and disjointed, but only because we’ve had 30 years in which to play games with better controls. 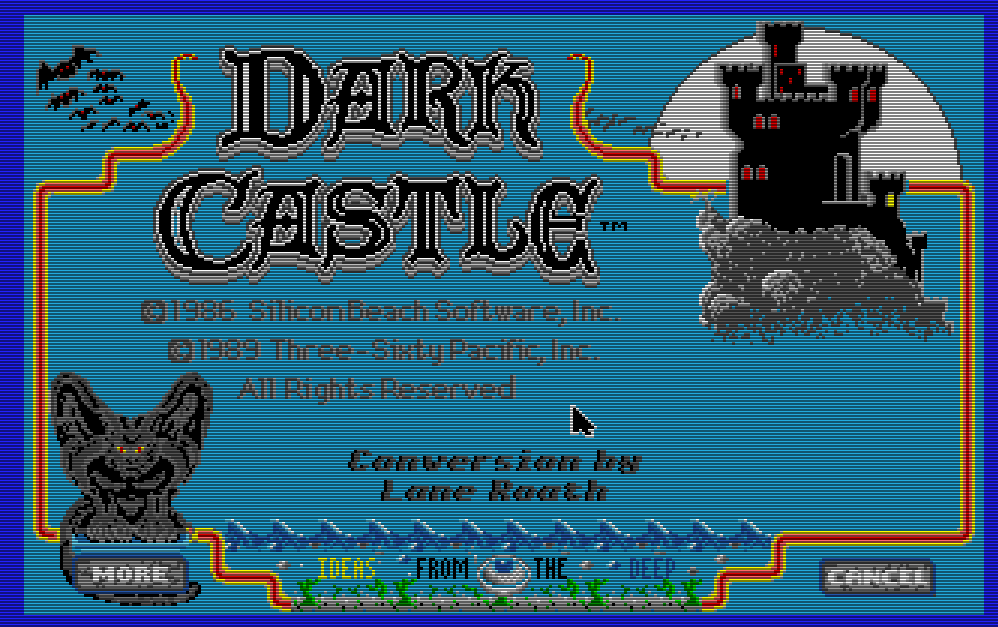 I’m playing the colorized 1989 version, which I am told is almost identical to the 1986 original save for the addition of color. The thing is, I can totally see why people were psyched about this game.

The sound effects are pretty great. Groundbreaking perhaps if you consider they were available in 1986! This is human speech from your platforming game a full 3 years before the Sega Genesis. The graphics are also excellent for the time. The animation is crisp and holds up fairly well for such an old title. 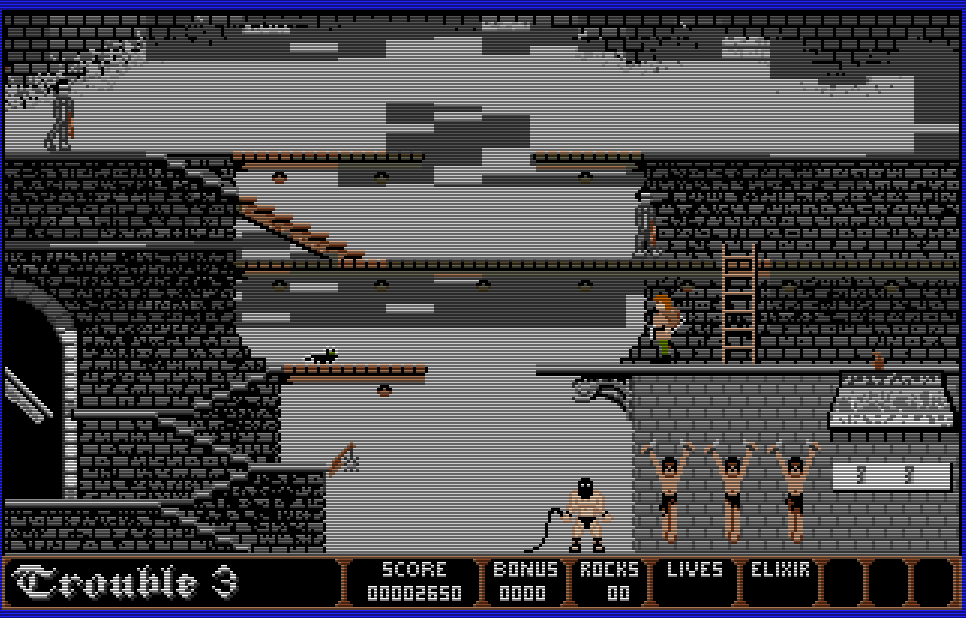 There’s also a number of interesting quirks to each level that leave the player wanting to see them all. Background characters move and the above room in particular reminded me of Blackthorne for DOS, which came out many years later in the 1990s. More than once I had to remind myself I was playing a game that came out smack dab in the middle of the 1980s when I was a child. It could have been at home on my computer in high school.

Unfortunately, those of us who are used to modern controls are in for a rough ride. This is a wacky control combination reminiscent of the “Quest for Glory”series, somehow mashed with ‘Abuse’, the seminal 2d action game. Once you’ve mastered the controls (and the fine art of throwing a finite amount of rocks in a very strange fashion), things progress quickly. You can easily beat this game in one or two sittings. You will die, many many times, but you’ll be stronger for it.

You’ll not be rewarded with animated cut scenes, achievement points, magic powers, or a shout on your wall. Only the promise of a harder challenge ready for you if you’re able, and a control scheme that I’d rather seen left dead and buried in the annals of game history. 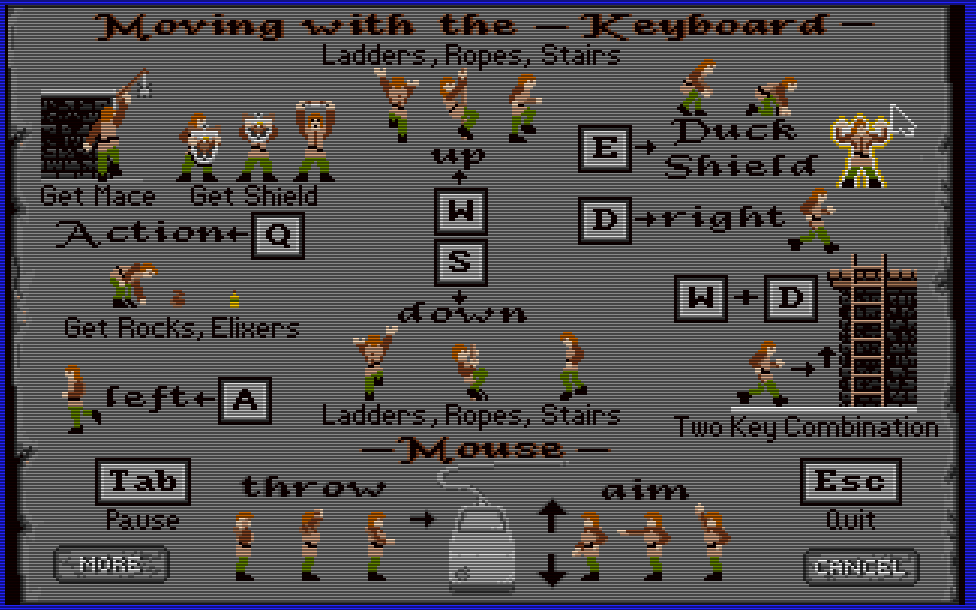 In the end, it’s not hard to recommend Dark Castle. Everyone should play it, purely for perspective. With the speed of processors stagnating, sometimes it’s refreshing to know that a talented team can overcome the limits of what’s accepted as possible and push beyond. I give Dark Castle a 65/100, playable but dated and somewhat lacking in the ole fun department. It’s a technological milestone that everyone should play, but not everyone will enjoy.