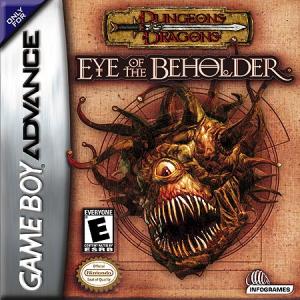 Can a game be so epically bad that it comes around the other side of the spectrum and becomes good again? Eye of the Beholder for the Game Boy Advance had me asking this question again and again.

It started on an airplane this weekend. Stuck in a cramped space with no internet and constant noise for 4-8 hours will drive you to some interesting distractions. That’s not the whole story though, it really started over 20 years ago. I was in junior high school, and Eye of the Beholder had just been released. As far as I was concerned, it changed everything. While I was a hardcore top-down gold-box DnD gamer, Eye of the Beholder was so immersive and mind-blowing on my 486. Doom was still 2 years away, and here was a first person Dungeons and Dragons game, with combat in first-person! Previous games had only let you view the map in first-person. This made all the difference, at the time. And not just for me. 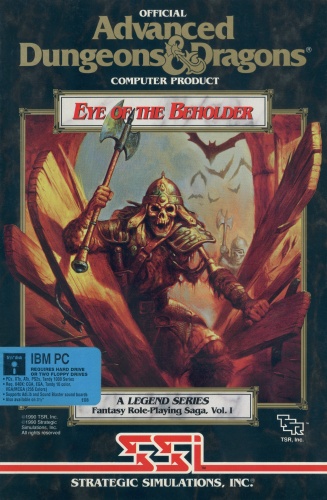 I was a nervous 7th grader in a new school. With no friends and a deep knowledge of computers, my prospects were slim. So I didn’t blend in so well that year, or so I thought. One of the cool “bad boy” types had been paired up with me for a pair exercise in english class. We had some down time to talk, and he asked if I liked DnD. You see, Eye of the Beholder had taken root in more hearts than mine. Something about the first-person perspective coupled with gorgeous graphics had managed to break through the strict cultural barriers of the time. It was perhaps the first time I realized the difference between mainstream and nerd was starting to lessen. 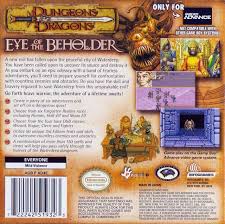 Twenty-two years later I picked up the GBA port on a whim. Not really to my surprise, it was a terrible port… if you can call it a port. It’s been shortened and lessened in every way. There are glaring holes in the user interface. Much of it feels unfinished and cobbled together from prior games (games which were almost 2 decades old when this “port” was released.) And yet, somehow these flaws all work together to make the game more than the sum of it’s shitty parts.

First off, there’s a finite number of enemies in the game. That means grinding levels (or moderately high level characters) are a no go. It also means you have to be clever and plan your battles carefully. This can make you desperate, but that desperation makes for a difficult and surprisingly engaging experience. There’s little creativity in the levels, though there is a bit of meanness at play in the user interface. When I say meanness in relation to a game, I mean that the developer hasn’t (or couldn’t) taken the time to flesh out a feature so that it’s obvious or intuitive to the user. 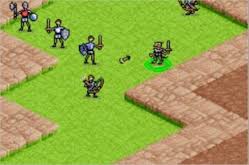 Case in point, there’s a set of abilities called ‘feats’ in the DnD game system. One of them is search. You would think that search lets you find hidden doors right? So you go along, using ‘search.’ And you don’t find anything. Odd right? At this point those who have recently played one of the older gold box games (think, Pools of Radiance) are probably laughing their collective asses off, because in the original gold box games you had to physically walk into a wall to find a hidden door. This game is no different. While the search command may occasionally say ‘you feel a draft’ to indicate a hidden door is near, you have to actually walk into the wall to find it. This means you must spent time scrutinizing each map looking for potential hidden doors, then go walk into the walls surrounding that space and hope for the best. There’s no upside on that one, it was a clunky user interface that was improved in later titles. 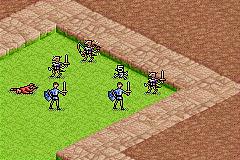 There’s also no first-person fighting. The actual ‘battles’ occur on a 2-d battlefield ala the gold-box games I loved so much in my youth. While vastly inferior graphically to first-person fights, they are an enjoyable throwback to my favorite RPGs of the 1980s. In fact, if you think of this as a gold-box game it’s not so terrible. It’s just a terrible port of EOTB.

And yet, somehow these flaws all work together to make the game more than the sum of it’s shitty parts. 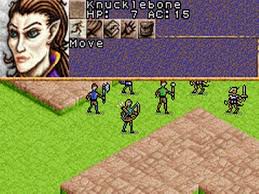 The dialog is paltry. The interaction with other characters is almost non-existent, save for a couple of planned interactions and monster parley (another feature of the gold-box games that threw me way back.) On the other hand there’s a surprisingly deep construction of the DnD ruleset at play here. You fully generate your party, fight monsters, etc just as you would in a gold box game. In fact, I am starting to believe that EOTB is actually a gold box toolkit game. Honestly, if it weren’t for a few user interface problems I’d think it was a module from the Unlimited Adventures creation kit, ported to run on the GBA. That’s not such a bad thing though, if you loved the gold box games.

The length of the game is also quite lacking for an RPG of this type. While the gold box games of the 1980s could be many dozens of hours long, EOTB is only 18 levels. You can complete it on 3 or 4 domestic plane trips (believe me.) This doesn’t bother me so much, as you’ll be more apt to re-play the game with different character sets if it’s shorter. Sadly, the entire game takes place in a single dungeon, and you’ll probably not want to revisit it that often. 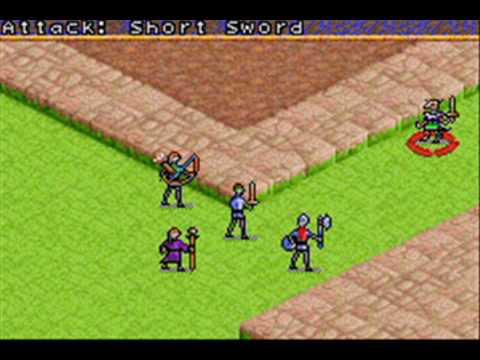 Coming back to the user interface, there are some real oversights. For one, there’s not display of armor or weapon stats. That’s right, if you haven’t memorized the stat tables in advance from playing actual DnD the relative strength if items will be a complete mystery to you. The map system doesn’t tell you which way your party is facing, making it a frustrating affair of trial-and-error every time you wish to get your bearings. There are teleporters (which are the cheapest level mechanic for a game of this type.) 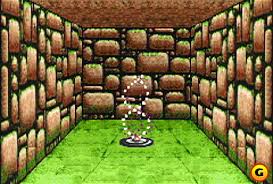 There’s also a healer who can raise your dead characters back from the dead. The way you actually have him raise your characters is so convoluted I actually couldn’t figure it out on my plane ride. I had to play with a dead character until I could search for the answer when I landed. These are things that the gold-box games had back in the mid 1980s. Let’s not forget this GBA game came out in 2002! That’s 4 years after half-life. On the other hand, for some reason this greatly reminded me of some in-person DnD games I’ve had over the years. That feeling of ridiculous, malicious frustration from a game is rare. It means you’re emotionally attached enough to care about it.

Had EOTB been marketed as a gold box game, it probably would have failed in 2002. I can admit that the audience for that is limited. But to dress the game up as a port of one of the most brilliant departures from that format was a mistake. I actually think a port of one of the Gold Box games could have been pretty great, an actual port of the creation toolkit would be amazing. And yet somehow, I can’t bring myself to dislike EOTBGBA (sounds like a boy band.) There’s enough of the gold box pedigree to be enjoyable for me, the die hard classic RPG fan. Sadly, that’s a very small percentage of my readers, or the gaming public. Given the glaring omissions, I can only assume this game was a rush job. I give it a 43/100 general score, but a 65/100 for die-hard fans. If you want a gold-box experience on your GBA, this is your best bet.