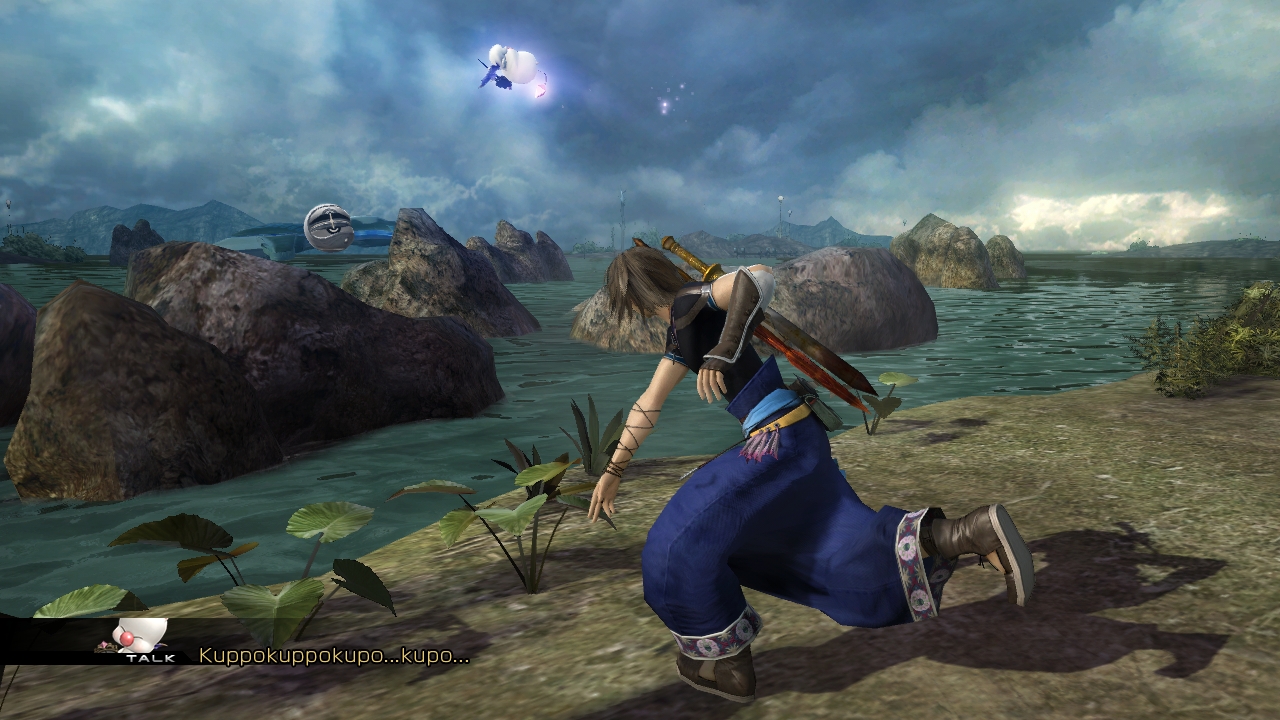 13 months ago I published my review of Final Fantasy XIII. Shortly thereafter, I picked up the sequel FFXIII-2 and began a new weekly ritual.

After a full year of this, I realized I was only halfway through the game, so this past month I’ve been kicking it up a notch and playing a full 4 hours weekly. 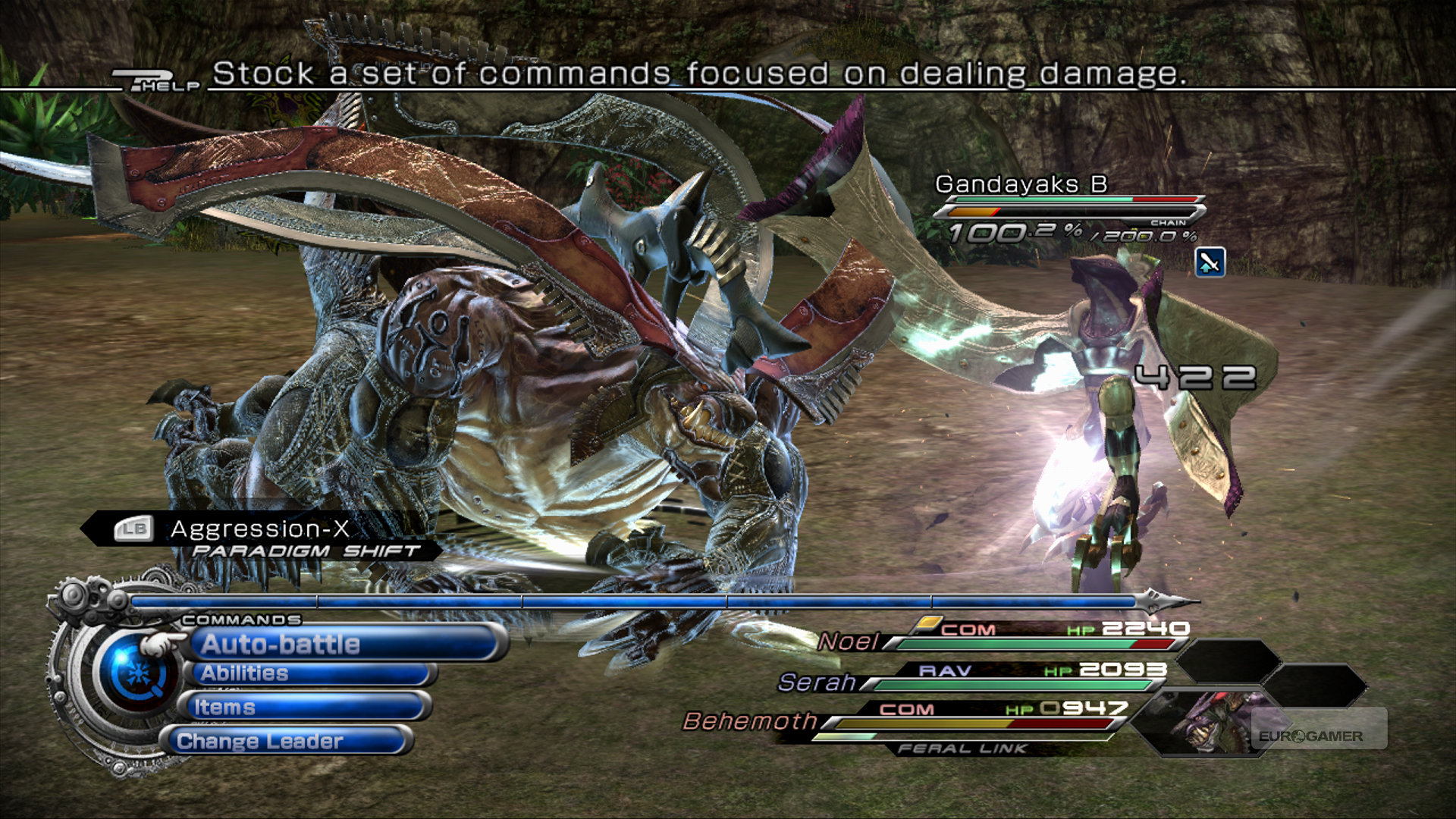 So, having spent the greater part of a year playing this game, you’d think I would have a pretty solid handle on the game mechanics, storyline, sidequests, etc that compose it. You’d be wrong. There are huge swaths of seemingly optional game mechanics, mini-games, collection quests, and grinding quests I had no interest in completing. (seriously, 100% each map? Did they not have a colorblind person test this? I got to 98% on one map and ended up just walking the edges for an hour looking for the bit that I missed.) Final Fantasy XIII-2 falls victim to the same trap as Kingdom Hearts 3D: sequel one-up syndrome. 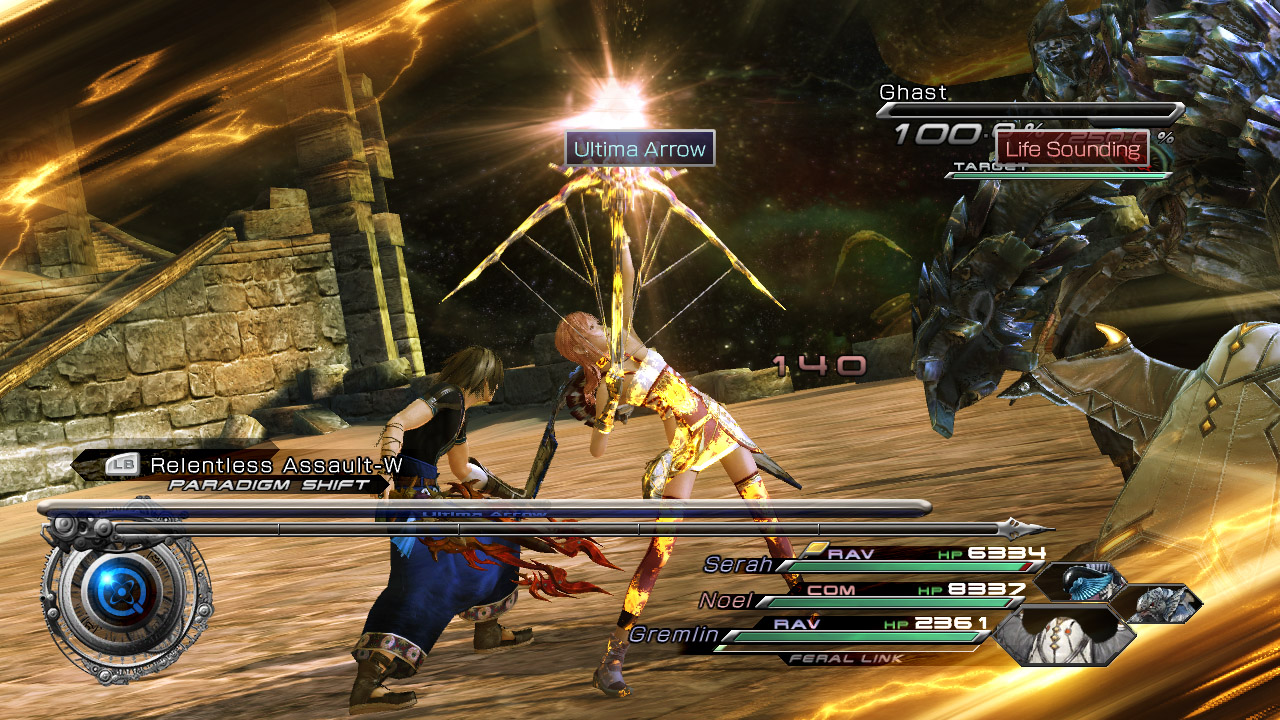 You see, Kingdom Hearts 3D, being the (10th?) in the series had a lot to live up to. Ten games of varying gameplay styles all chock full of storyline and game mechanics. As a game designer, you’d be forgiven for thinking this is what your audience wants, as Kingdom Hearts is a multinational best-selling phenomenon. So when you’re crafting up this awesome sequel, nothing is off limits. Fans want a card game? Add a card game. Fans want Pokemon? Add monster collecting. Fans love Monster Hunter? Add monster hunting quests. 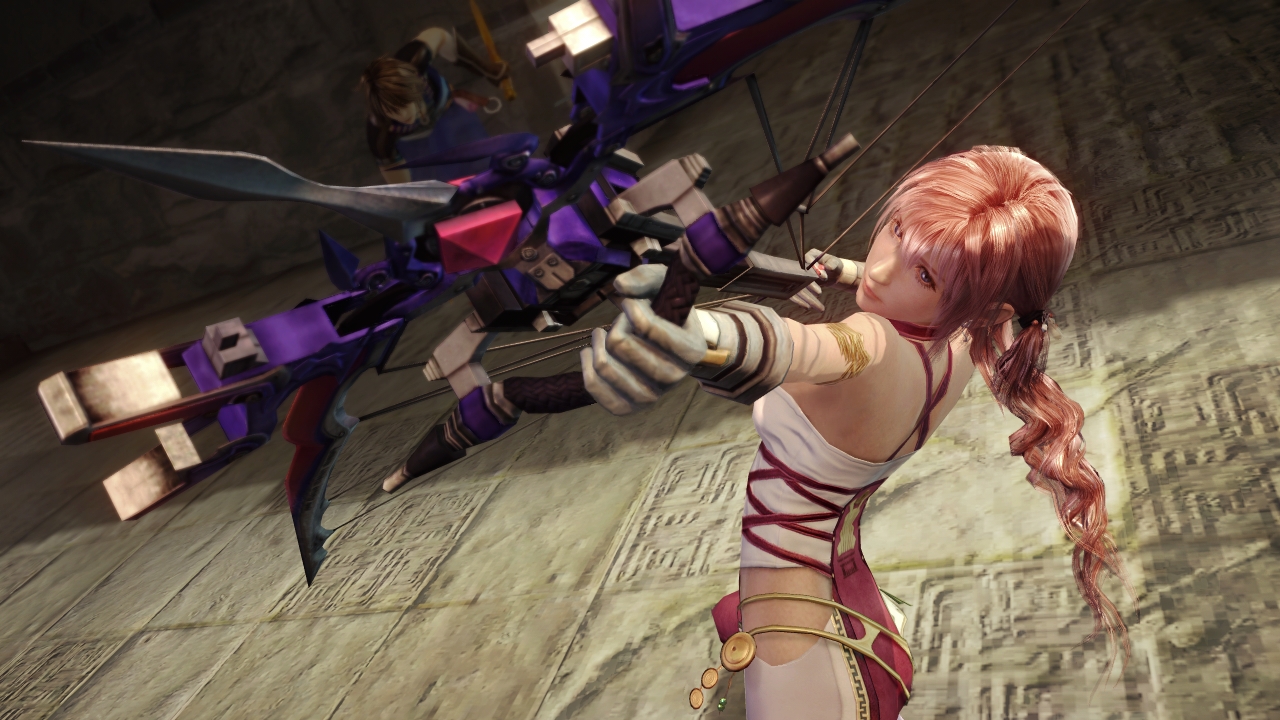 So it was with Kingdom Hearts 3D, and so it is with Final Fantasy XIII-2 (abbreviated 13-2 from here on.) Pokemon, monster hunter, IQ (intelligent Qube), and previous Final Fantasy games all add their own flavor to this gaming jambalaya.

One of the major complaints about Final Fantasy 13 was it’s linear nature. You literally didn’t get a single side-quest until 20 hours into the game, and only then do you realize that all of the side-quests are literally contained within this single area. 13-2 solves this by making the game seem non-linear through time travel: you choose your locations through time from a large grid. In reality this is to cover up the huge amount of backtracking that occurs though the relatively small game world. 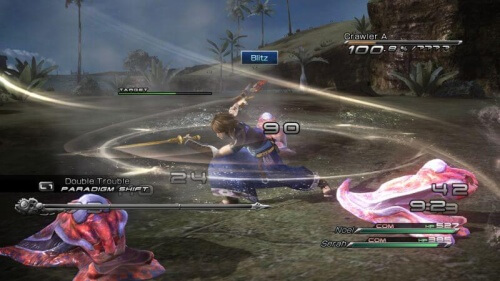 It’s a fascinating concept, in theory. You play as time traveling pokemon adventurers (oh yes, they added monster collecting/fighting into this one.) Each level has multiple time periods associated with it, as well as multiple alternate timelines. Unfortunately, these “alternate timeline” levels all share the same map, and this only serves to make the game more of a grind.
And it is a grind. You’ve only two main characters in your party, with the third character slot taken up by your pokemon. These are always the same two characters, so be sure you like them. They’re all you get. While adventuring, you’re introduced to level bosses earlier than you’re ready to handle them, so you’ll need to backtrack and grind levels before each major confrontation. After ten to twenty hours of gameplay you’ve literally seen 99% of the maps in this game, with one particularly frustrating puzzle level saved for the last boss. (seriously, jumping puzzles?)

You’re also constantly searching for hidden objects, using an annoying mog-throwing minigame mechanism that detracts from gameplay. Honestly though, I really enjoyed this aspect of the game. Not because it was fun! Oh no! The mog that follows your team around is annoying as hell, and this hidden object game gives you the chance to continually throw the little bastard off of cliffs.

I’ll say this about the modern Final Fantasy games, they know how to stretch for time. Thirty or forty hours into the game I realized I hadn’t even scratched the surface of the chocobo racing league, or the chocobo breeding program, or the gambling machines, or the extra sidequests from finding hidden collectibles. 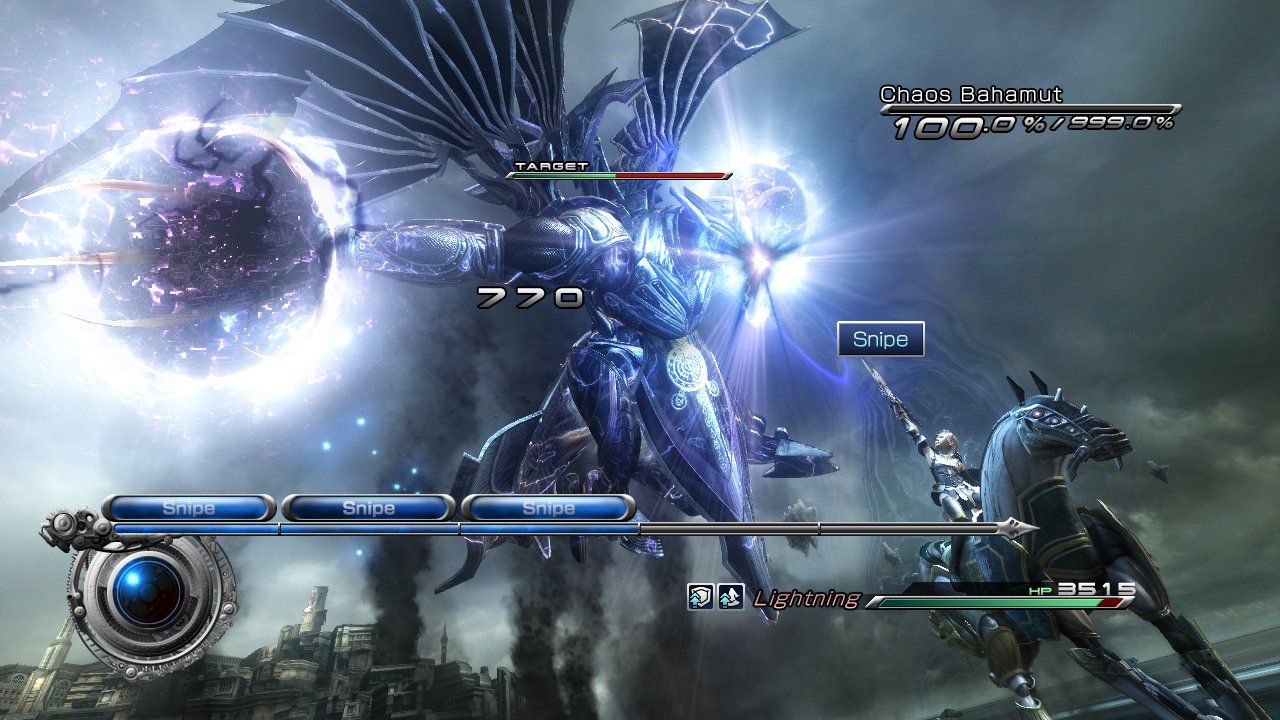 That’s not to say this isn’t a fun game. 13-2 is a Final Fantasy game after all, and you can expect a certain level of polish and twists on RPG mechanics from from any of them. This is just the kind of fun where you need to know exactly what you enjoy. I didn’t miss the time I would have spent racing chocobos, nor did I have any trouble questing without the endless hidden object collectible rewards. Though they are purported to be major portions of the game, I wasn’t interested, and 13-2 let me remain that way.

In a way, that’s part of the appeal of a sprawling RPG: the opportunity to dive deep on interesting gameplay, and skim over the less enjoyable portions. And though after a year I never feel like 13-2 grabbed me in the way Fallout 4 did, I did enjoy the time spent questing and leveling and throwing that stupid mog over cliffs.

I rate Final Fantasy XIII-2 70/100, with high marks for the mog-throwing schadenfreude.